As one of the most influential world religions, Islam serves as a source of comfort for many. Dating back to the 7th century, the religion is practiced by an estimated two billion followers. Home to one of the UK’s largest Islamic communities, Birmingham celebrates the diversity of voices within this community. One of the five pillars of Islam; Salat – meaning the act of praying whilst facing the holy city of Mecca concerns itself with the five prayers that take place throughout the day, and delving deeper into this act, with a focus on the whispers/thoughts that may accompany this, Soul City Arts’ WASWASA – Whispers in Prayer respectfully showcases this in motion. 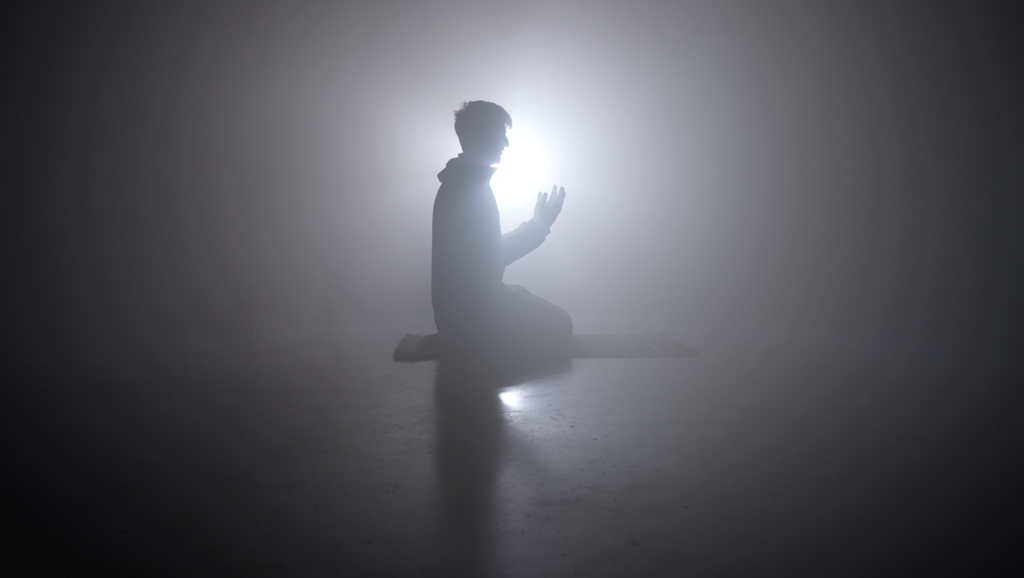 Asked to take off our shoes, we slowly detach from the distraction of the outside world and embrace the calmness that is to follow/takeover, firstly entering into a brief labyrinthine installation adorned with prayers noted by Rashid Campbell. A stunning introduction to the show, we’re left to read the numerous thoughtful prayers and take in each word and thought as we walk through, this alone very powerful to take in, connecting individuals globally and serving as a reminder that we all share similar concerns.

We then hear a young man’s (Mustafa Chaudhry) story first hand, a second generation immigrant whose parents originated from Uganda dealing with the assimilation process of growing up in a predominantly white Birmingham and the racism and misunderstandings that came from this. Walking through the hall of prayers before entering a beautifully designed park setting crafted by art and production designer Matt Reeves, painted by Graham Kershaw with production assistance by Finn Reeves, a pond centre stage surrounded by astroturf- we move deeper into a feeling of calm, as nature sounds off and a huge projector screen plays a cyclical montage including an image of the holy Arabic scriptures of the Qu’ran supplied by Salshan Cinematography, with video support by Salman H and Film support by John Bradburn and editing by the show’s creator Mohammed Ali MBE, we watch the process of the five Islamic daily prayers yet understand the challenges that can come from ensuring that this is achieved in a fast paced, working world. The back and forth between Chaudhry walking through a physical door and appearing on the projector upstage in filmed segments allowing for us to piece together significant moments within his life that have led up to now, and the whispers that continue to haunt him – a constant battle between achieving piece and not letting dark thoughts take over.

WASWASA – Whispers in Prayer is a feat in artistry and creativity, a clever amalgamation of sound, video, art and live theatre, the show bravely breaks ground, challenging misconceptions of Islam to foster a feeling of peace and unity. An insightful show that’s arrived at the right time.

WASWASA – Whispers in Prayer is currently showing until Sunday 3rd September at the Birmingham Hippodrome. To find out more about the production, visit here…