A moving and daring piece of feminist theatre by New Earth Theatre Company which tackles issues of diplomacy, war crimes, sexual slavery, and generational trauma. Not a second of theatre was wasted with a narrative so neat, so precise that I kept abandoning my notebook in fear of missing a second of it. Kyo Choi is without a doubt a gifted storyteller that had this audience at the palm of her hands. Post lockdown the Arcola continues to disrupt the theatre scene at a time when we need dissenting voices most. 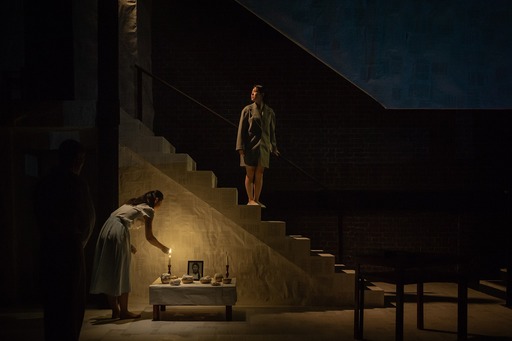 I’ve been meaning to check out a New Earth production ever since I knew it existed. The lead image of young Sun-Hee looking back at the viewer is stark and captivating. Paired with the description of The Apology as “a powerful human story that asks how a nation can apologise for the crimes of its past” I was expecting big things and I was not disappointed. This was documentary theatre packaged in a story that some how brought to life and made relatable vast global players like the UN and US diplomacy.

Performances were outstanding with the chemistry between the characters stealing the show. The frequent father-daughter and lawyer-diplomat scenes were a treat to watch, and never got predictable. Minhee Yeo was excellent at playing the concerned daughter who pieces together her family history. Yeo’s character personifies how, however well a secret is kept, there are always unsettling traces left behind. This is one way in which generational trauma is explored in this play. Her concern for her ageing father is very relatable as the tables turn and she starts to infantilise him, much to her father’s vexation.

Jock Taylor, played by Ross Armstrong was frustratingly good as he lorded it over “pretty” Human Rights lawyer Priyanka Silva, ticking all the arsehole boxes as he patronised, bantered and invaded personal space his way through the scenes, and yet remarkably Choi has managed to make parts of his character redeemable.

Sarah Lam as the protagonist Kim Sun-Hee is unyielding in her rage delivering extraordinary performances on what must have been psychologically challenging places to go as an actor. Kwong Loke unravelled the many layers of Han Min, the father, with great humour and depth. These days we are so conditioned into hearing stories about the young. This play was a welcome break from the ill-conceived Hollywood notion that only young people have meaningful stories to tell.

This is an extraordinary story that has been systematically erased in our history. I invite you to the revolutionary act of listening so that the story of Kim Sun-Hee and the tens of thousands of “comfort women” like her can be told in the name of justice for those who died in inhumane conditions, those who survived and were ostracised, and, as hope for the countless of girls and women in sexual slavery today.

The Apology is currently showing until Saturday 8th October 2022 at the Arcola Theatre. To find out more about the production, visit here…