Featuring an unprecedented dialogue between the works of two exceptional artists; Claude Monet and Joan Mitchell, the Fondation Louis Vuitton are delighted to announce the launch of the ‘Monet- Mitchell’ exhibition, open now and until 27th February 2023. 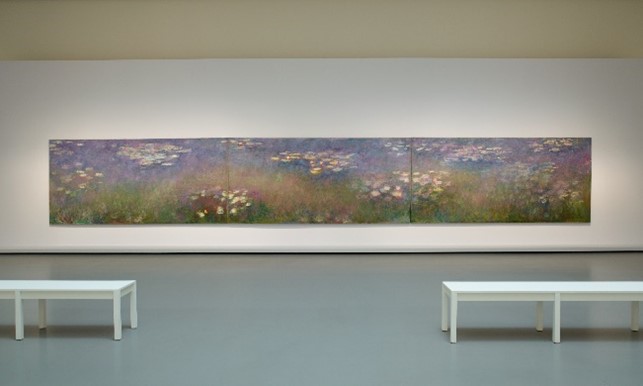 Creating for the very first time, a visual, artistic, sensorial poetic dialogue between Monet’s later works (1914-1926) and American painter Mitchell’s works, this exhibition is not to be missed. Presenting each artist’s unique response to a shared landscape, the ‘Monet-Mitchell’ exhibition is complemented by a retrospective of Joan Mitchell’s work, enabling the European public to discover more about her unique art.

Spanning across eight galleries, this exhibition offers the public an enchanting and immersive journey through 70 iconic works by both artists.  Showcasing their singular perceptions of the same composed landscape through 35 works by Monet, including 25 belonging to the Musee Marmottan Monet (France) offering an overview of the Water Lillies, and 35 works – 25 paintings and 10 pastels by Joan Mitchell. Rarely presented without a frame, Water Lillies, is displayed in a dialogue with Mitchell’s works.

Significantly, the exhibition brings together two exceptional bodies of work:

Suzanne Pagé, Artistic Director of Fondation Louis Vuitton and Curator of the exhibition, states the exhibition is “a further expression of the Fondation’s unshakeable commitment to connecting historical modernity and a contemporary commitment through rapprochements or commonalities between artists or artistic movements”.

In partnership with the San Francisco Museum of Modern Art and the Baltimore Museum of Art; The Joan Mitchell retrospective will be displayed across two galleries on the ground floor of the Frank Gehry building. With over 50 works on display, this is the most significant Joan Mitchell retrospective to be shown in Europe in almost 30 years. Inspired by the work of Monet, Van Gogh, Cezanne, and others, Mitchell’s work is characterized by her intimate bond with landscapes and constant search for colour and light, as she often declared ‘I carry my landscapes around with me’.

Suzanne Pagé, notes that her work is the “quintessence of abstraction in a manner that is entirely singular by its very paradox: ‘My painting is abstract,’ the artist said, ‘but it is also a landscape.”

The exhibitions are open now and until 27thFebruary 2023 for visitors to have the chance to see these magnificent collections. For further information visit here…