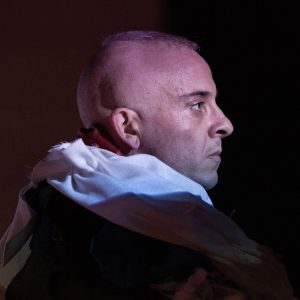 Founded a decade ago in 2012 to platform the work of marginalised artists, performance venue Ugly Duck, located in Bermondsey – South East London, has been at the forefront of working with performance artists who are not afraid of exploring lesser talked about themes. Their @Disturbance Festival, now in its 4th year specifically created to showcase LGBTQ+ artists and stories. Set to show The Plastic Drag, a visual and sound work investigating how a new wave of underrepresented gender-non-conforming and diverse drag artists are redefining the art of drag and its subversive potential as part of Ugly Duck’s 10th year anniversary on the 10th,11th and 12th of November, artist Orlando Myxx tells us more about how they’ve approached creating the piece, what’s been learned from creating the piece and what the audience can expect!

Hi Orlando, you’ll be taking part in Ugly Duck’s @Disturbance Festival from 10th to 12thNovember. How are you feeling ahead of the event?

I’m very excited for the opportunity to install my work, The Plastic Drag, as a double projection. When I first started working at it, I had a very clear vision of how I wanted the audience to experience it. But that implied a space and techs requirements I never had access to. @Disturbance is giving me the opportunity to finally see my work installed IRL and not just in my head. I’m very excited but also a bit scared, as the installation is challenging. Luckily the Ugly Duck team is very experienced and it’s providing me a lot of support. Which is a great opportunity to learn and grow as an installation artist.

You’ll be showcasing The Plastic Drag, a visual and sound work investigating how a new wave of underrepresented gender-non-conforming and diverse drag artists are redefining the art of drag and its subversive potential. What has inspired the creation of your piece?

As a trans-masc non-binary queer person, in my art practice I’m investigating how gender-non-conforming people are not only questioning gender norms, but also how they are redefining the very notion of gender and envisioning new gender identities.

I found that one of the most interesting spaces where this is happening is the underground scene of drag artists who identify as trans, non-binary, dykes, gender-non-conforming, which goes from unconventional drag queens performers, to drag kings and … drag things.

As a photographer and filmmaker I’ve documented the London scene since 2017 and that made me appreciate the importance of drag performers for the queer community, as they give expression and image to all the new gender identities that are emerging in recent years. What also attracted me to these performers is that their art is political, not only because they defy gender norms, but also because they deal with issues like racism, decolonisation, mental health, ableism and obviously the patriarchy. The Plastic Drag aims at celebrating these performers, creating a series of portraits that give audiences an insight into their art.

I wanted to explore the intimate relationship between the artist and their drag persona, and how you create an (other) image of yourself that still is yourself. I was fascinated by the duality and unity implied in performing a drag persona.

The idea of being an image and creating an image of your own self was the starting point and how the drag persona comes out of all the images that have been feeding the artist. So I thought I’d created two portraits having a conversation with each other on a background made out of their iconic inspiration. I start interviewing  the artist, then I rework the interview to create a script that features the two characters, the artist and their drag persona. It’s a dialogue and a monologue at the same time. I also ask questions about what inspires them, investigating the imagery that comes into shaping their drag persona. I then stage and film the dialogue/monologue having the whole figure in a vertical frame and look for everything I can find about their visual inspiration which I then edit into a sort of visual background.

I’m extremely excited to be part of @Disturbance. I first discover Ugly Duck in 2017 when I was taking photos of an event (Livia Rita’s new album launch). I immediately fell in love with the space and the art the I could experienced there. The venue is not the usual polished white cube gallery but rather a decadent and rusty Victorian warehouse giving a platform to experimental, thought provoking queer art. Ever since I’ve been following Ugly Duck and connected to the queer and artistic community that it support. So being part of @Disturbance is like a dream come true.

Since I’m a very introverted and shy person I quite enjoy being and working on my own, so before making this piece my art practice was very much that of the solitary artist relying on their own skills. But for this work I had to step out of my comfort zone. I had to find someone to design the sound for the piece, as I don’t have any skills when it comes to music. And now I have an established collaboration with sound designer Lottie Lou.

I hope people will realise that drag doesn’t mean only drag queens and that there’s more to it than just Ru Paul’s Drag Race. And maybe they will be inspired to find out more about the art of drag.

Ultimately I’d like people to see the work and think that gender is just an illusion.