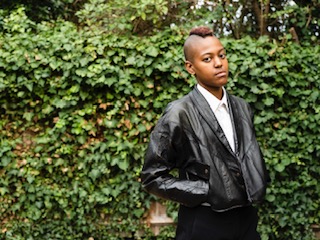 Founded a decade ago in 2012 to platform the work of marginalised artists, performance venue Ugly Duck, located in Bermondsey – South East London, has been at the forefront of working with performance artists who are not afraid of exploring lesser talked about themes. Their @Disturbance Festival, now in its 4th year specifically created to showcase LGBTQ+ artists and stories. Set to show The Earth’s Monologue, a piece exploring the intersection of race and gender which will encompass performance and video art as part of Ugly Duck’s 10th year anniversary on the 10th,11th and 12th of November, artist Joy Kincaid tells us how their feeling ahead of the event, exploring the show’s themes further and what they’ve taken away from the creative process!

Hi Joy, you’ll be taking part in Ugly Duck’s @Disturbance Festival from 10th to the 12 November. How are you feeling ahead of the event?

I’m feeling excited, excited for the possibility of instilling hope in folk right now and in all. I’m feeling politically urgent and I’m ready to inspire that on stage with my body.

You’ll be showcasing a piece exploring the intersection of race and gender which will encompass performance and video art. What has inspired the creation of your piece?

I’m performing a piece called The Earth’s Monologue in which our Black, Non-Binary Parent Earth shall be expressing their rage. I guess what has inspired it is, as a Black, Non-Binary person I’m feeling and witnessing multiple points of harm in the world right now and feel that this relates to the way the earth might be feeling at this point in time, in that it’s sometimes like I’m feeling everybody’s pain and witnessing pains because of my proximities to harm.

So, my practice in relation to this performance has been very spiritual, I decided very early on that I would need to channel the earth’s feelings in order to tap into a knowledge that is beyond me.  I called in to the intention of channelling the Black Non-binary Parent Earth and through that, I will say that I have been moving through anger at humans, falling in love with humans over and over, just before I’m about to give up! Through this experience, I’ve been taking on a method approach.

I’m really proud to be part of this as I feel a huge amount of expansivity in this platforming of LGBTQIA+ community, its world shifting. I am so grateful to @Disturbance and the Ugly Duck team for giving myself and other amazing artists this opportunity.

If you’re making provocative or issue-led work that hopefully speaks to the world, you’ve got to really nourish yourself as you’re going into the mud. To go into the mud, you have to flood that space with light.

That remains to be seen.