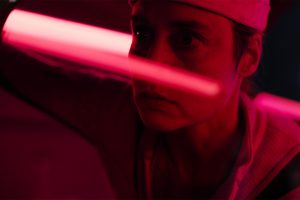 With awards’ season well and truly underway, we’re yet again introduced to an array of mainstream and independent works deserving of acknowledgement for the effort put in both onscreen and behind the scenes. Having won gold at the Student Academy Awards for his short film Almost Home, director Nils Keller returns to contend for the main prize in the ‘Live Action Short Film’ category this year, on Sunday 12th March, with the final nomination list revealed on Tuesday 24th January. A coming of age sci-fi film that shares a story of a teenager who beats the odds, however faces a dangerous destiny, Almost Home is a worthy contender. Ahead of this year’s ceremony, Nils tells us more about exploring the film’s narrative further, working with the cast and creative team to realise the filmic vision and what it means to be acknowledged by the Academy!

Hi Nils, your short film Almost Home has been shortlisted in the ‘Live Action Short Film’ category at this year’s Academy Awards. How are you feeling ahead of the ceremony?

Hi and thanks so much for having me! It is a very humbling feeling to be shortlisted among so many great filmmakers at such an esteemed institution. On January 24th, it will be announced whether Almost Home proceeds onto the nomination list, which would mean an invitation to the actual award ceremony. Of course, that would be even more incredible. Everything that has happened so far, and the fact that Almost Home is one of the first sci-fi films to make it onto the shortlist for “Best Live Action Short Film” at the Oscars, is a great honour for us as young filmmakers and the whole team who have worked very hard to make our no-budget dream of a deeply human story in space a reality.

Almost Home is a coming of age sci-fi film that shares a story of a teenager who beats the odds, however faces a dangerous destiny. What inspired yourself to explore the narrative further?

The idea for Almost Home was inspired by a newspaper article I read in March 2020 about a cruise ship’s odyssey due to the increasing fear of Covid 19. What really shook me was the mention of people who, after being trapped aboard their floating prison for weeks, and despite the prospect of finally being able to leave it, questioned whether it was safer to stay. Absurd at first glance, I immediately wondered what this might say about our lifelong and very personal struggle to walk the line between safety and freedom. The idea of using certain aspects of this article and turning it into a more universal short film story that departs from Covid’s reality and takes the form of a character-driven coming-of-age drama set in space evolved over the next few days. From here, the main reason for setting this story in a futuristic and isolated environment was to distance it as much as possible from Covid 19. The same goes for the choice of Jakob as our main character. He is at an age when the question of whom we want to be, what we want from life and what we think lies ahead is most pressing. However, this is accompanied by insecurities, the novelty of questioning our parents and the need to take responsibility ourselves. In a dramatic film that deals with the question of self-determination and the struggle between security and freedom, a teenager who has already been through a lot seemed the most natural protagonist.

Directed by yourself, the film was produced by Jonas Lembeck, with cinematography by Georg Nikolaus and stars Susanne Wolff, Jeremias Meyer and Stephan Kampwirth. How have you all worked together to realise the film?

It was a very multi-layered and collaborative effort to get this idea of an intimate human drama in space off the ground. Georg, the DoP and I worked very closely together from the beginning to make sure that the visual language conveyed our drama and that everything we came up with visually supported our intentions about the story we wanted to tell. To achieve this, we discussed every detail of what would be created as a visual stage. Beginning of course with the necessary shape and size of the spaceship, the possible angles it would offer, etc. Once production designer Pan Patellis had created the 3D model, we used it to move around and accurately storyboard the film. Otherwise, we wouldn’t have had a chance to complete the shoot in just 11.5 days with all the technical requirements we thought necessary to create this world. But besides practicality, we often took a step back and asked ourselves how the imagery would convey Jakob’s feelings and the world that exists onboard our spaceship in an emotional, cinematic, and sometimes poetic way. We came up with tools like a moving sun or old photos and memorabilia, created by Nena Jägersberger the Art Director and her team, to give the place a sense of home. As an integral part of the team creating this whole world, it’s obligatory to mention Lukas Väth who almost single-handedly created all the visual effects for our film and deserves huge credit in the look & feel.

Yet whatever we came up with creatively, it wouldn’t have worked without the support of Jonas Lembeck, who, together with his production team at Le Hof Media, believed in the project from the beginning. They found the right partners to sponsor the project and oftentimes lent a hand themselves to make things happen. For example, since we couldn’t afford a proper studio, they found an old hall owned by Munich’s wastewater management. Here we could work very freely but had to handle some less than perfect conditions. Huge skylights, for example. Jonas climbed up on the roof to cover it with a pond liner. And when the electricity wasn’t strong enough for some of the technical equipment, he somehow managed to get a generator on set in a few hours and in heavy rain. In the end, even though not everything was possible, Georg, Jonas and I often got together and thought about how we could do as much as possible.

Regarding our actors and actresses: As mentioned earlier, Almost Home was intended to be a deeply human sci-fi story at its core, and it’s obvious how important their performances were in this endeavor. And just imagine how abstract the environment of a 60 square meter wooden spaceship was. It’s a lot to ask of the actors to treat it like a home. To fill their roles of people who have gone through things most of us hardly can imagine. In the case of Jakob and Nico two years of isolation inside a spaceship might break apart at any moment. Plus, there was a lot of technical preparation, like wiring for zero gravity, that they had to deal with. Still, I was amazed at how well they handled it all. We started talking about the script and the implications of their existence months before the shoot. They were all very keen to understand the technologies and make sure they had a connection they could relate to. Like the old photos I mentioned. Or understanding how to use the toilet in zero gravity, even though that was never supposed to be shown. I think the biggest task for actors is to really be in a scene. And all that emotional groundwork is part of that effort. Also, in rehearsals and on set, we worked very openly and closely on the scenes to really bring out the emotional core and find out what for example the relationship of mother and son under these extreme conditions must be like. That also meant that the final scene, for example, was an improvisation to replace an earlier one in the script that we all didn’t like as much as the one we came up with together.

Prior to being shortlisted for an Academy Award, Almost Home was the recipient of a Student Academy Award. What did it mean to yourself and the team to receive this acknowledgement?

As I mentioned earlier, it’s incredibly rewarding to know that such experienced filmmakers and lovers of cinema have seen our film and found it worthy of these honours. Considering how hard it was to get here, how much could have gone wrong and how incredible it is that everyone kept trusting in our vision, I really get goosebumps that the film made it here. It also gives us a lot of confidence for our upcoming projects, which will also play with different genres that are to set the stage for deeply human and character-driven dramas.

I think the most important thing is “never give up”. And by that, I don’t just mean the classic way of believing in yourself. Rather, I mean that it’s important to stay true to your expectations at every single stage of the project and not lower your standards just because one step becomes unexpectedly difficult. Because if you do that, it not only damages the project, it is also very unfair to all the work and trust that has gone into it before. It’s a kind of betrayal of the dreams and efforts of your collaborators who really believed that this was going to be something great and would otherwise not have spent so many hours without payment doing overnight shifts etc. I can assure you that there were many moments when I felt, “This doesn’t feel like it should, but maybe that’s a limitation we can’t overcome as a student film.” I’m very glad that we rarely let that stand and when we had to, we didn’t give up on finding an appropriately creative solution to make the film live up to the promise we had made. That we would go all the way with our team in achieving something to be proud of. This said I can assure you that not in our wildest dreams we’d have dared to expect such a successful and incredible journey for our film.

What can audiences expect from the film?

I would say a hopefully heartfelt and cinematic sci-fi journey, but that is ultimately a matter of personal taste. I’m certainly most proud of the fact that – apart from all the technical aspects of this production – viewers from very different backgrounds mostly express, how much the film touched them emotionally. How much it felt relevant to them in a way that related to their own life story or their personal experiences and feelings during the Covid. But if Almost Home ends up being just an entertaining little coming-of-age story, I really think that’s an amazing outcome too!

What would you like for audiences to take away from the film?

My greatest wish is that it conveys something about the power of human relationships. The need and blessing to trust and believe in each other, even in difficult times. Also, the need to sometimes be in conflict and to sort out our relationships through disagreement. But most of all, I think this film represents the unpredictability of everyone’s life path, which rarely goes as planned.

To find out more about Almost Home, visit here…

« Previous post
Filmmaking duo Ross White and Tom Berkeley talk about their short film ‘An Irish Goodbye’ which has been shortlisted in the ‘Live Action Short Film’ category at this year’s Academy Awards
Next post »
Director and Performer Faizal Abdullah talks about performing in production ‘Siapa Yang Bawa Melayu Aku Pergi (Who Took My Malay Away?)’ at the Network Theatre which forms part of this year’s VAULT Festival