Continually surrounded by the mundanity of her rehabilitation unit, Louise discovers an intriguing and bewildering world that awaits her. 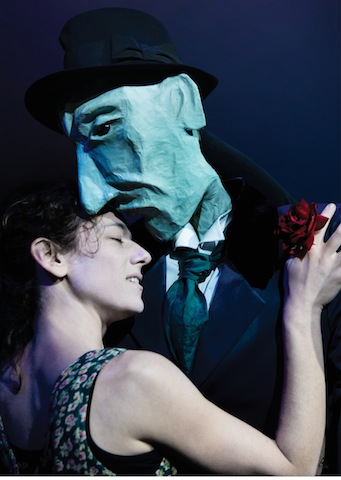 Performed by Theatre Temoin, The Fantasist delved into the mindset of Louise, as she battled with the unpredictable nature of Bipolar Disorder. Portraying Louise’s bouts of insomnia, Julia Yevnine restlessly rolled around, constantly sitting up as she struggled to sleep. Inventively performed standing up whilst leaning against a bed, creating a birds eye view perspective, the set swiftly transformed into a wardrobe, setting the tone for the surreal and imaginative piece. In the wardrobe, Louise discovered a blue jacket, which she became entranced by, convinced that it was alive. Performed by a cast of three, scenes transitioned between real life and fantasy, as Louise found her attentions drawn to an alluring yet mysterious blue jacket wearing stranger, who appeared to bring out her artistic side, encouraging her to paint. This was contrasted with the constant reality of occasional visits by a friend and being under the watchful eye of hospital staff. Brought to life by Julia Yevnine, Catherine Gerrard and Julia Correa through the use of puppetry, the charming stranger, and a host of other characters from a cruel cackling green goblin, to singing mischievous mannequin heads were one of the strongest elements of the production. The puppets took on a life of their own, at times creating the impression that there were more than only three cast members on stage. The cast smartly and imaginatively created a surreal and intriguing setting, as the worlds of real life and fantasy became blurred; from a talking miniature statue to Sellotape shapeshifting from fluttering butterflies, to a kite rustling in the wind, to a swing. The Fantasist was a roller coaster of a piece, that focused on the highs and lows of the protagonist, whilst stylistically bringing the inanimate to life, 4/5.

The Fantasist was performed by Theatre Temoin at Tristan Bates Theatre, as part of the Suspense Festival 2013.