Spring has finally sprung, as parts of Britain enjoyed the warmest day of the year so far on the weekend, beating the likes of the Mediterranean. With the Flamenco Festival in full swing, having arrived for the London leg of their international tour, it’s fair to say that the cast of Gala Flamenca have brought much needed sunshine to the capital… 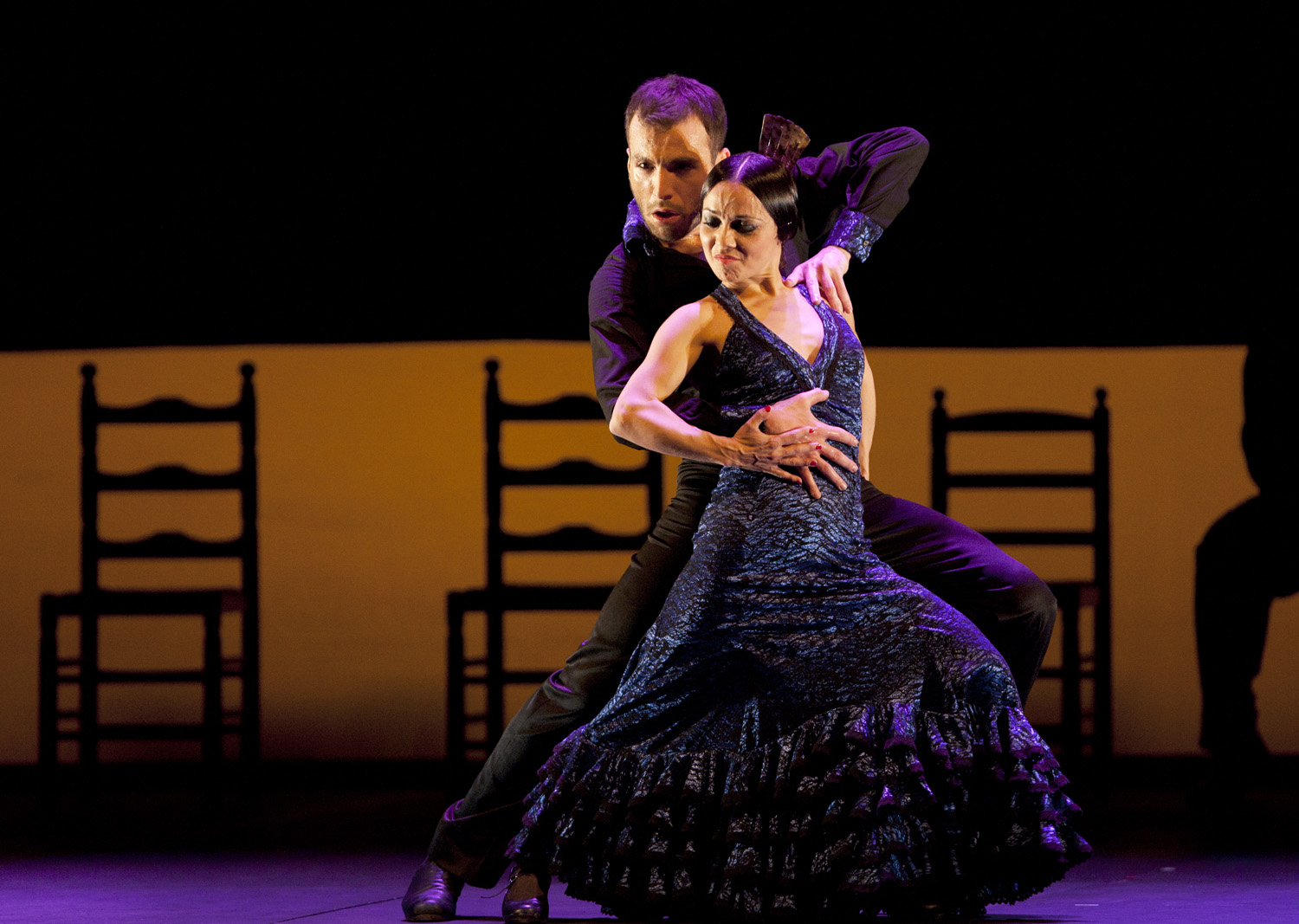 Originating in Southern Spain (Andalusia) in the latter half of the 18th century, Flamenco is a folk music and dance form commonly associated with elaborate costumes, dynamic dance routines and powerful music. A celebration of Flamenco’s finest choreographer’s and performers, Gala Flamenca’s Five Seasons presents a selection of routines as four dancers transport the audience through a landscape of nimble foot work, powerful lines and engaging narratives.

Laura Rozalen‘s choreography intrigued and engaged as she began her routine in silence. With poise and grace, Rozalen intently created a dialogue with beautiful arm movements and foot work. With every arm movement it were as if she were clutching the air, perhaps reaching out for something, perhaps an answer in which her choreography was the question. Every footstep and movement proved pivotal, the silence heightening the performance.

A stark contrast to Rozalen’s graceful choreography was Olga Pericet and Marco Flores‘ dynamic duet. A compelling and energetic routine depicting the youthful yet fiery temperament of the couple. With only a spotlight centre stage, Pericet and Flores dramatically encircled the spotlight, the tension building as the two dancers appeared ready for battle, however swiftly contrasting this as the dancers worked in partnership to create striking synchronised moments. The crowd pleasing routine proved to be one of the highlights of the production, showcasing Flores’ quick and agile footwork and Pericets’ engaging and dynamic stage presence, elements that they then would then go on to showcase in their solo pieces later on in the performance.

Mercedes Ruiz commanded the stage with her undeniable presence. Slowly walking across the stage, dressed in a long black dressed, Ruiz depicted a woman in mourning, a character coming to terms with the loss of somebody or something very dear to her. Her movements, fluid, slow, longing as her arms appeared to seek guidance or hope from above were quickly interweaved with sharp, sudden and fast movements, displaying moments of anger. Ruiz astonished with her energetic foot work, to the point where it appeared as if Ruiz was gliding in the air. Another crowd pleasing moment that had the entire auditorium applauding and cheering before it had even concluded.

Singers Londro, Miguel Ortega and Manuel Gago dramatically created a musical setting for each of the dance performances, transporting the rows of audience members to the southern climes of Spain with powerful drones that echoed throughout the space. Creating call and response moments with the dancers, the dancers in themselves became an extension of the orchestra as their footsteps tapped diligently across the floor. Santiago Lara and Antonia Jimenez‘s guitars created that authentic flamenco sound that is to become associated with the art form and Rafael Garcia’s percussion created the musical heart of the musical score. 4/5 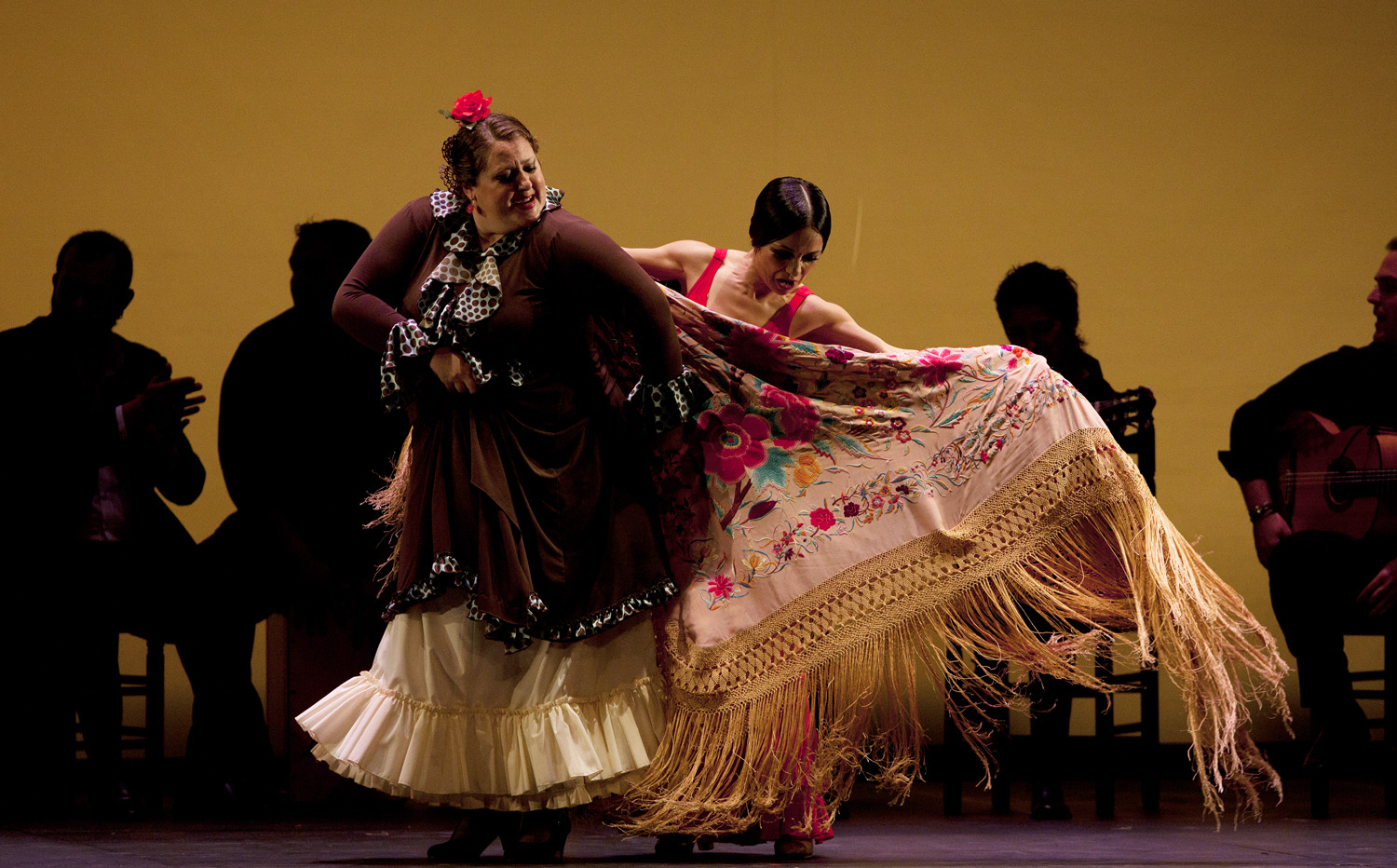 Gala Flamenca’s Five Seasons is currently showing at Sadler’s Wells Theatre until Thursday 13th March, for more information on the show, as well as the Flamenco Festival 2014, visit here…