Gbemisola Ikumelo reprises her role as Serena in Hopelessly Devoted, here, she talks to Theatrefullstop about the role! (Interview) 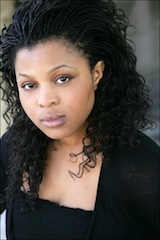 You may be mistaken for thinking that the play’s title bares any relation to Olivia Newton John’s 1978 hit, however, the two could not be any more different! Ahead of Monday’s opening night, I was able to talk to Gbemisola Ikumelo, who plays prison in mate Serena in the Kate Tempest Production…

So you’re currently starring in Kate Tempest’s ‘Hopefully Devoted’, can you tell me what the show is about?

The show is about a woman called Chess, played by Cat Simmons. Chess is in prison for a long time, and her best mate in prison becomes her everything. Her best mate Serena ends up being put on parole and leaves, forcing Chess to look at herself, her past and the things she’s done. A character called Silver comes into the mix and helps her, through music, as she’s a music producer looking for redemption for herself in someways, and comes in to help Chess make music, so with Silver as her new support system, Chess has to face her truth, but find this freedom through the music.

You star as Serena, a cellmate released on parole, could you describe her character?

Serena is a warrior. She’s been in and out of prison and she’s been an addict. She’s calmed down a lot since meeting Chess; Chess has been her support, her shoulder to cry on, and she’s really scared for now for the possibility of her (Chess) leaving prison. Naturally, it’s become like home, prison, so the notion of having to go out, be a mum again, to do all those things is quite terrifying for her.

Do you identify with Serena?

I think you have to find a way in to identify with whatever character you play, even if they’re quite removed from you. I definitely understand where she is coming from, and I definitely empathise with her.

Could you describe the rehearsal process? Is there a typical rehearsal day?

A typical rehearsal day? This has happened twice (the production), and this is the second time round. The first time round when we were rehearsing this, there was a lot of still discovering the music, even though the lyrics had been written, some of the melodies (were still) being developed, so that was a very different experience to rehearsing this time round. We knew what the music was and I guess the challenge was to re-own some of those things and to be bold, to make new changes to things that were there originally. We had the Music Director (Tom Attwood) come and go over music with us, we had a Movement Director (Tuan Ly) as well, and went over some of the movement aspects of the piece. (We) also had a drummer who came in and taught us about beats, especially for the character Chess, who had to be familiar in that world. Everyday felt different to be honest.

The play is written by Kate Tempest whose previous plays Wasted and Brand New Ancients have received critical acclaim, have you met her? Is he involved in the rehearsal process?

Yes, we have met her and she’s awesome! She’s very humble and very generous with her writing. She’d be in the rehearsal room, and she’d maybe sense that, ok, that line’s not quite working, and she’d go away and re-write something. So, because you’re working in new writing, it’s a real collaborative experience because writers’ are bouncing off the actors’, the actors’ are bouncing off the writers’. She was very much involved in the process of getting the script up on its feet.

You’ve also written and directed yourself, would you be returning back to that?

I’m working on a couple of projects myself for next year with the production company that I run (FAITH Drama Productions). I’m in the middle of writing a play, and I’m just finishing off a draft of a pilot for a screen project that we’re doing.

Your career has varied from working on BBC radio, starring in the National Theatre’s 2009 production of Wole Soyinka’s Death and the Kings Horsemen, and you’ve made an appearance on the BBCs Bafta Award Winning Holby City, do you prefer working in radio, TV or on stage?

I think they all have their rewards; I love radio because you don’t have to worry about how you look, or where you’re standing or whatever. You totally internalise this character just through your voice and have lots of fun with that, and I find that really exhilarating. I love the theatre because there’s nothing like that live experience, there’s nothing like being on stage, in that moment. There’s no take. I love film and I love television, I’d love to be an audience member and watch how I can be transported into this world. I love the opportunity to provide that, to know that we’re taking people into the space, and I love the fact that it’s so vast in terms of the team, from the gaffer to the director, everyone has their role, it’s a massive unit, it’s fantastic! They all have their appeal!

For any aspiring performers out there, what advice would you give them?

Know your craft, work at it! If that means taking some courses, if that means drama school, if that means talking to yourself in the mirror and acting out scenarios, just know your craft! Get to know your limitations and get to know your strengths. Get experience, join the youth theatre, all those kinds of things, just plug at it and then when you feel like you want to start pursuing it professionally, understand the industry and understand how it works, it’s a tough industry, so you need to know who the people are, who are booking jobs, who are hiring.

Gbemisola Ikumelo will be starring as Serena in Hopelessly Devoted from Monday 7th April until Saturday 19th April at the Tricycle Theatre. For more information on the production, click here…