With policing procedures such as the Stop and Search principle coming under fire for its discriminative nature; the reputation of the police force has become questionable. Post 2011, and incidents such as the causation of the London Riots and revelations over the true events of the Hillsborough disaster in 1989 have only further unearthed a darker and corrupt aspect to an organisation purposed in protecting the lives of civilians… 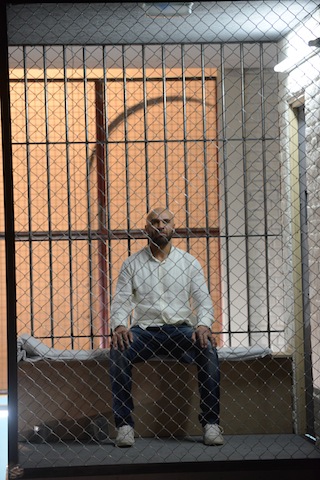 Transported 5,000 miles across the North Atlantic, Roy Williams‘ Kingston 14 observes the on going interrogative and investigative practises of the Jamaican police force as they make efforts to convict the key suspect, infamous gang leader, Joker in an ongoing murder investigation. With a seemingly forgone conclusion, the arrival of a British Police Officer only further shakes up the team dynamic, and a shadier side of the tropical island is brought to light.

ULTZ‘s geometric set design dominated the entirety of the production. A Tetris inspired character all of its own, backdrops imaginatively transitioned from the play’s prison-centric environment of roughly painted blue walls, flickering neon ceiling lights and a watchtower- esque prison cell propelled above the stage; to a dingy, dusty basement pre-occupied by a kidnapped police officer (Charles Venn).

Roy Williams‘ patois infused script contained many a comical gem; with Trevor Laird‘s all knowing, quick talking Senior Police Officer delivering risque, scenario based jokes whilst Ashley Chin‘s naive Police Officer referenced iconic filmic quotes. Declarative political statements served as hard hitting reality checks, with Trevor Laird’s Senior police officer and Derek Elroy’s British Police officer continually disputing over the manner in which to handle the case. References to gang culture, and the 2011 London Riots were both used to hold up a mirror to the justice systems both in the UK and Jamaica. The subject of cultural heritage was also explored, with Elroy’s British Police Officer looking to his Jamaican roots. Taking on the form of a murder mystery, the shows structure by its conclusion became very tangled, leaving many unanswered questions. With the kidnapping of both police officers, played by Charles Venn and Ashley Chin, this sub-plot in itself became a narrative all of its own.

Clint Dyer‘s direction mixed the contrasting worlds of comical farce with gritty realistic drama, however the farcical element over powered the more hard hitting moments. A novel look at the murder mystery genre, Kingston 14 was too busy as it attempted to cover a lot of ground. 3/5 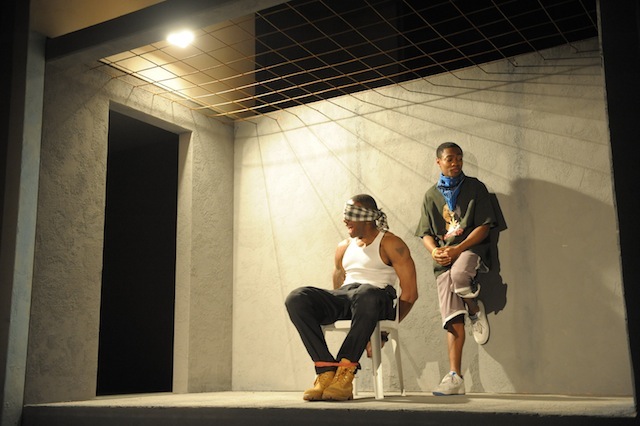