The power of friendships are that they can form in the most unlikeliest of places. Drawn together by a common experience, bonds can easily be established and made stronger by the sharing of similar interests. With the prospect of serving a life long prison sentence, it may very well be a case of keeping your friends close, and your enemies even closer in a system driven by fear hierarchy and rehabilitation…

A collaborative venture between Paines Plough, Birmingham Repertory Theatre and Award winning Poet and Playwright Kate Tempest, Hopelessly Devoted spotlights the close friendship between Serena and Chess, offering an alternative outlook on an environment conventionally presented for its hostile nature. With the Prospect of Serena’s parole fastly approaching, Chess faces a long prison spell with nobody to turn to or trust.

Joanna Scotcher‘s chessboard inspired backdrop comprising of grey cell block pieces and white ceiling squares amplifies the claustrophobic element of a prison environment; prison cells and rehabilitation units blurring into one clinical setting as Cat Williams’ Chess continually adjusts to an imprisoned sense of normality. Reverberating calls and shouts from Michelle Gayle and Gbemisola Ikumelo from the sidelines further add to establishing the many prison cells that occupy the building, a vast maze of in mates left for the audience to imagine.

Williams’ playfully navigates through Kate Tempest’s lyrical labyrinth of a script with an effortless charm. A powerhouse with an old school inspired Jazz vocal, Williams’ infuses this with a hint of the Lily Allen English lilt. Ikumelo’s Serena is the anchor of the production, a support system for Chess, and her only hope in a bleak institution. Their friendship drives the production, two mothers forced to adapt into a fearful setting away from their families. Gayle’s enigmatic Silver serves as the saving grace for Chess; an ex in mate, whose dreams of becoming a successful music producer were quickly quashed by a life time of bad choices. A source of Salvation, Silver’s role sustains an air of intrigue and at times feels incomplete, but an interesting character that could be further looked at.

Music serves at the heart of the production, a way of breaking up the monotony of prison life. From every click of the finger, to the hitting and stamping of the ground music plays an integral part of Serena and Chess’ relationship, from solos, to spoken word, to soundscapes. An imaginative dramatic experience, Hopelessly Devoted‘s strength is in it’s musical elements. 3/5 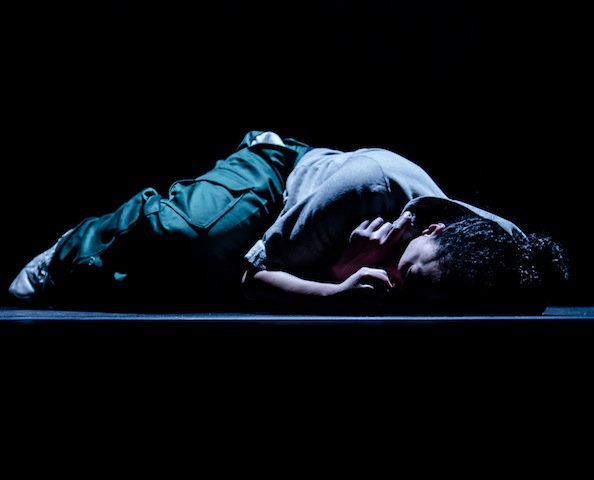 Hopelessly Devoted is currently showing at The Tricycle Theatre until Saturday 19th April, for information on the production, click here…