Close your eyes. Imagine you are back in time, a young child again, sitting on your grandfathers’ knee whilst he slowly drinks his whisky, savours every deep breath from his roll up, and tells you a story, a story you have heard a thousand times before, his favourite story of the Wild West that you’ve grown to love over the years just as much as he. That is what watching ‘The Man Who Shot Liberty Valance’ felt like; an overwhelming sense of familiarity, but unique in its presence in the Western field. 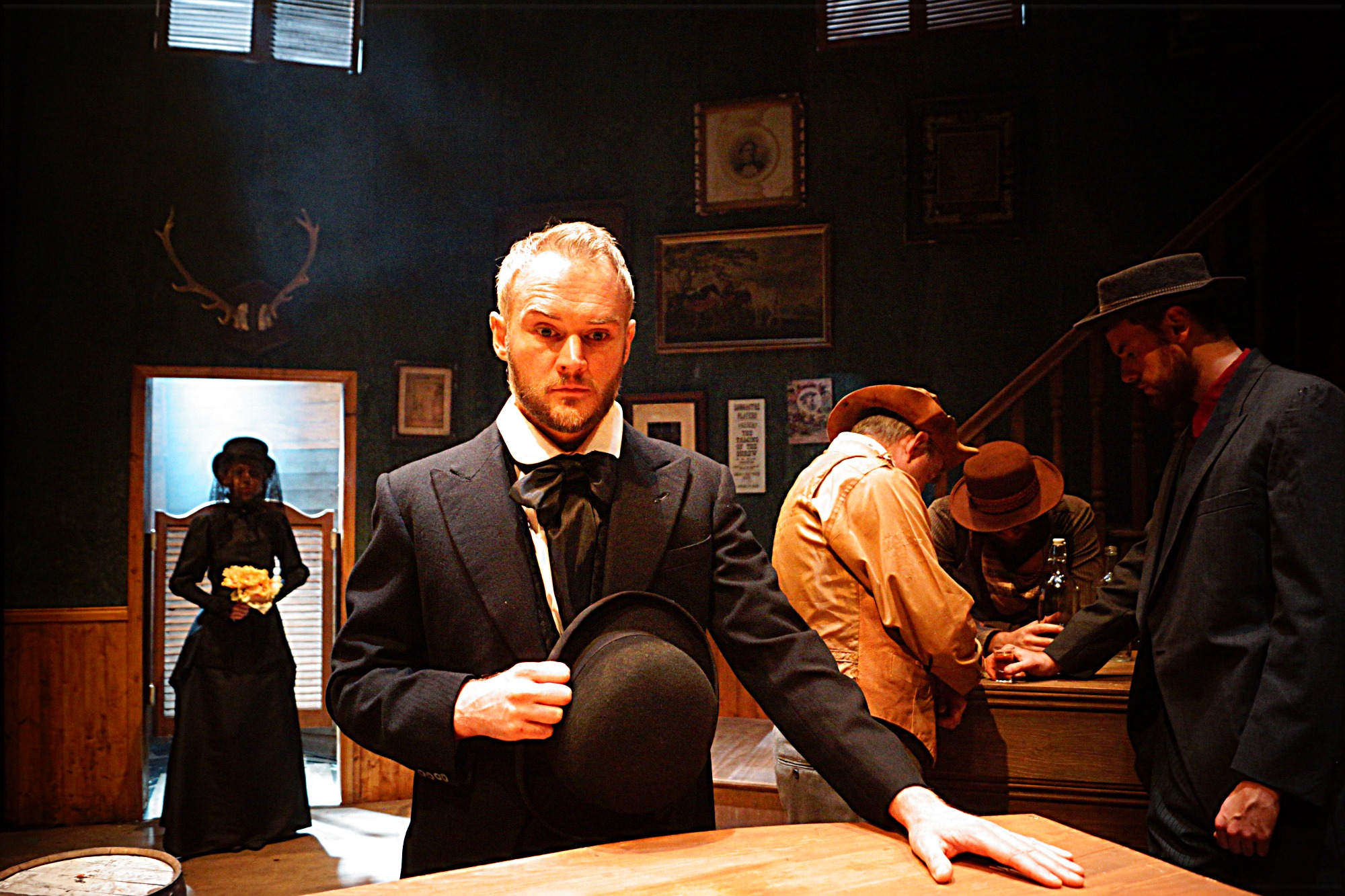 It is rare to find a Western onstage that isn’t a musical and when you do it’s often a relief, but even then you can’t help but compare Jethro Compton‘s stage play ‘The Man Who Shot Liberty Valance’ to the famous 1962 film adaptation starring the Cowboy legend John Wayne; and yet all I can do is raise up my hands and praise hallelujah that someone has finally brought Westerns out of the 50’s and into the 21st Century to create this stroke of simplistic genius.

Complete with orange dust covered costumes, peeling green wallpaper, swinging saloon doors and real Cheroots, you can’t help but feel not only that everything unfurling before you is real, but that you, yourself are part of the story. The acting was incredibly emotive, with Paul Albertson stealing your heart as the tough talking Cowboy with a soft soul, Oliver Lansley and Niamh Walsh tickling your funny bone with their sparky Beatrix and Benedict style romance, and Lanre Malaolu bringing you to tears with a simple tremble of his lip. Without a doubt James Marlowe stole the show with his gripping portrayal of Liberty Valance. Valance is everything you want him to be – the epitome of bad – a villain with a cruel laugh, a quick tongue and a menacing stance. Foster describes him as “a vicious dog that’s turned feral”, with slicked back hair, an attitude in his walk and a tall top hat, creating the illusion that he is in fact the Bill Sykes of the West. Marlowe commands the stage with his presence, which is specifically poignant whenever he exists; pausing a moment before the Saloon doors, he turns, knowingly looking back over his shoulder towards the audience. He plays his character as a man for whom instilling fear and terror is business, and Liberty Valance enjoys his work.

The surprising and necessary narration by Robert Vaughn, the godfather or Western films, brilliantly added to the ‘grandfathers’ story’ effect that Compton succeeded in creating, bringing to life this earthy and gritty performance of the battle of the West as dictated by Valance, and the law of the East – legislation and civilisation – supported by Stoddard.
I believe that Dorothy M. Johnson would have been proud to see her much loved tale develop into such a rich and fulfilling production, and it would be a huge mistake if you forsake the chance to see ‘The Man Who Shot Liberty Valance.’ 4/5 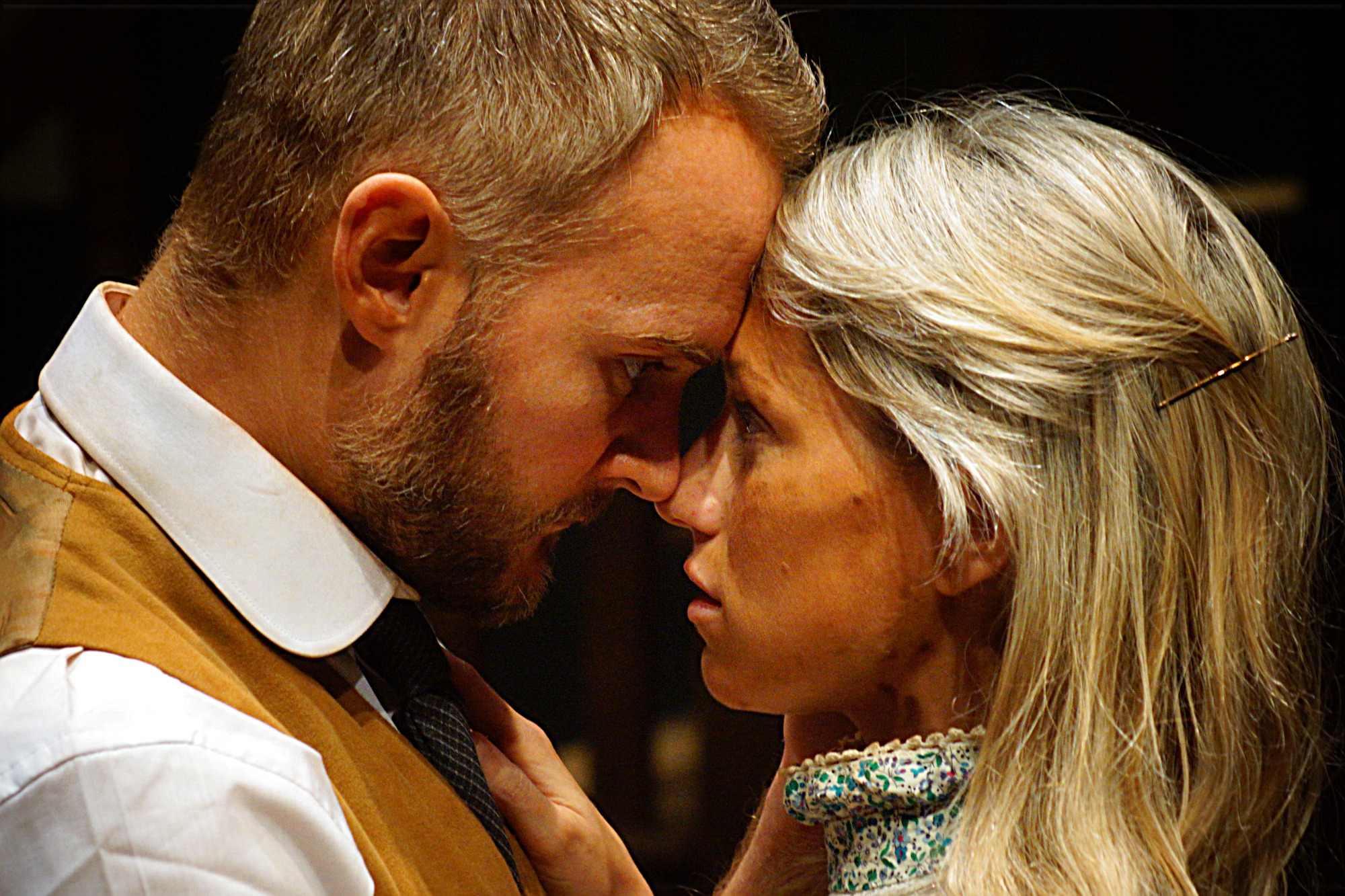 The Man Who Shot Liberty Valance is currently at the The Park Theatre until Sunday 22nd June. For more information on the production, visit here…