“No specific words can express the meaning of tonight’s performance. Rather, these pieces are permeated with our conceptions of ‘the body’ and physical practice. So what your eyes perceive is exactly what our hearts hope to express.” This quote from Tao Ye expresses exactly what has been achieved in his creations ‘4 and 5’. It was impossible to encapsulate a single moment or meaning as separate from the whole, such was the fluidity of the piece. Thoughts, feelings, associations would spring to mind but none could define or describe the entirety of the dances. 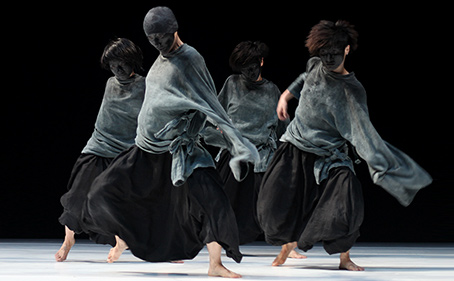 ‘4’, a piece aptly named after the number of dancers who perform, began suddenly as the lights flared up to a bright white. The dance was fluid as the performers never stopped moving, creating an impression in my mind of water. Their movements appeared effortless and they seemed to float across the white floor with an easy grace. All four dancers moved together throughout as one entity. They were together in their movements, and yet separate; they never touched or moved closer to each other, their positions fixed in relation to the dancers around them.

The synchronicity of their movement meant I never found I looked at just one dancer, but the movements of all four together. There appeared to be an intention to move away from the idea of the individual. This was intensified by the loose fitting clothes each dancer wore, hiding any differences in body shape, and the black paint on their faces which hid their facial features.

The ending was a fitting representation of the entire piece. There was no clear idea of definitive finality. The lights slowly faded as the dancers moved with a decreasing speed to the back of the stage until eventually we could no longer see them, and we were left completely in the dark.

In ‘5’, the five dancers began together, but it soon became apparent this piece was in many ways the opposite of 4; they moved separately but were never separated. There was none of the synchronicity of the previous piece but a thrumming base line gave the impression of a machine. Indeed, the movements of the dancers worked in tandem – some rising up as others fell slowly back, each dancer supporting the movements of their companions.

Inexplicably, the eyes of every performer were shut for the entire piece. Their travels across the stage were led only by the feeling of the others around them. The idea of the body that Tao Ye believes to be so important was thoroughly expressed and explored in this piece, each dancer remaining a part of the group by entwining their body around another’s. Although the trousers worn by each dancer were loose, their tops were tight and of a flesh colour which intensified the idea of the body and the audience’s awareness of it.

Overall, although very different in construction, both pieces worked beautifully to create an image of the way meaning can flow and that art does not need to be defined by words. The body has potential to dispel any ideas we create to define it.

4 & 5 is currently showing at the Lilian Baylis Studio until Saturday 7th June. For more information on the production, visit here…