The Flying Roast Goose melded charming storytelling and aesthetic experimentation, but ultimately lacked bite. Conceived by Paula Siu in association with Out of Chaos and Yellow Earth Theatre, the production followed the story of a Cantonese street-food stall owner and her pet goose Yong Yong through the Japanese invasion of Hong Kong in the 1940s. Playful and very watchable, The Flying Roast Goose was certainly a good entry into a topic that some audience members may know little about, with Eastern stories often being neglected on the Western stage. 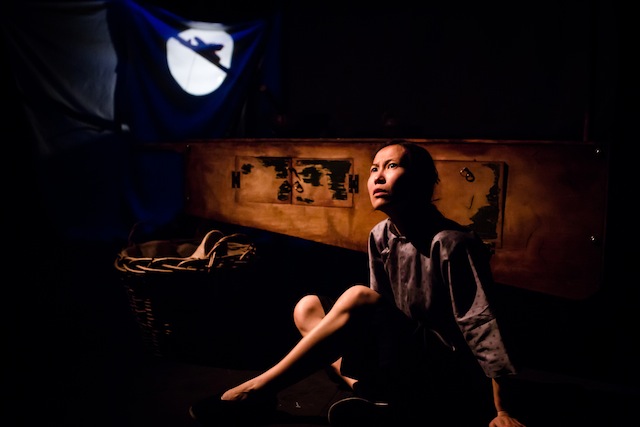 The technical side of the production was a triumph. Opening with a flurry of chopsticks and rhythmic cutting, we were immersed immediately in an oriental world swiftly followed by a beautiful creation of a bustling Hong Kong street. Colourful shadow puppetry portrayed a bus trundling through a cityscape and out along a harbour where a ship glided across the water accompanied by a Cantonese soundtrack. Puppetry of many forms was the mainstay of the piece. Manipulation of kitchen utensils was used to create the turmoil of a war zone, clattering about in a terrifying earthquake, and later springing to life to depict the protaganist’s descension into madness in her hunger ravaged mind. The manipulation of the goose, by supporting cast members Kristoffer Huball and Jane Crawshaw, was almost perfect; Yong Yong was alive, appearing both soulful and comical, becoming the character that the audience was rooting for.

Indeed, the relationship between Yong Yong and Siu was central and certainly was heart warming, but I felt it failed to achieve its potential. In a world entirely dominated by one woman and a goose, the realities of human emotion and relations were lost. I wanted to know about the family of the protagonist, her home, how those around her were managing to survive. Instead, other characters merely floated through like threatening phantoms, existing only as rivals who stole and pillaged, meaning that the opportunity to explore the situation at the time was not fully realised. The show felt almost child-like in projection, pitched at a younger audience than it attracted. This was also underpinned by the acting of Siu. Although obviously a stylistic choice, I found her too blatant, swinging between demonic smiles of joy and frowns of baffled confusion. Similarly, the scene briefly introducing a Welsh soldier – played by Huball – lacked subtlety, acting simply as a cliché lost in translation situation, played out for laughs. I commended, however, Siu’s decision to have most of the communication taking place in Cantonese, with only a few English interludes to nudge the story along. The meaning was always perfectly clear and the piece felt more culturally authentic.

The creativity encapsulated in the production excited me, and for a small theatre company without many resources, there was clearly a lot of vision behind the piece. However, with further development and more in-depth exploration of the situation in Hong Kong, The Flying Roast Goose ultimately would have been more moving and more memorable. 3/5

The Flying Roast Goose is currently showing at The Blue Elephant Theatre until Saturday 21st June. For more infor on the production, visit here…