Part of LIFT 2014 at the Artsdepot Centre, Super Premium Soft Double Vanilla Rich promised to be an exploration of Japanese Consumerism through humour and dreamlike movement. Set in a Japanese convenience store, we meet the workers and Branch Manager and are given an insight into the working environment they have to contend with. However, whether or not this explored Japanese Consumerism is questionable. 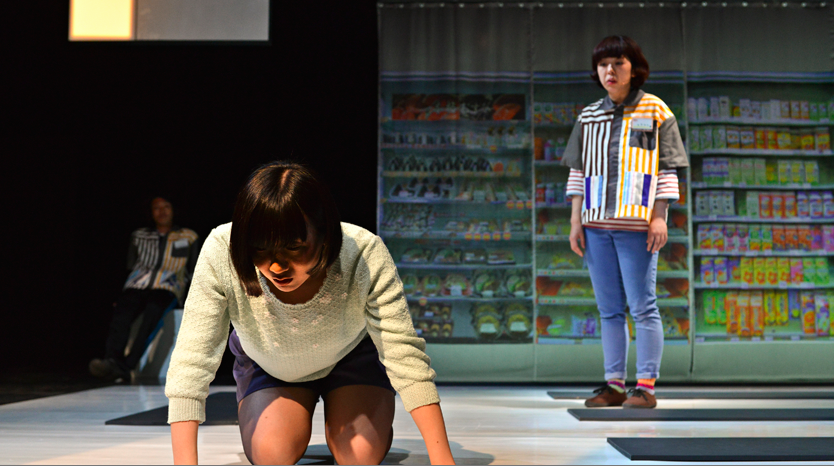 To an extent I could understand the dramatic irony in showing the slow, day by day tasks within the store. There was a certain amount of empathy to be given to the workers as we watched them be polite to disrespectful customers, and saw the Branch Manager being shouted at by head office. However these menial tasks formed the entire basis of the show. For example, in the middle was a fifteen minute monologue in which the Branch Manager outlined almost every product sold within the store. Initially this was humorous, if only for its outright ridiculousness, but unfortunately the joke grew old very quickly.

The show was performed in Japanese with English subtitles. The dialogue itself was extremely slow and at times, boring. Luckily there was the occasional flash of humour that gave us an insight into the characters. The rest consisted of the description of the menial tasks. One of the only aspects that kept the play interesting was the movement of the actors. Mostly their movements seemed to have no link to what they were saying, and each character had their own stylised way of moving around the stage. The lack of relevance the movement had to their dialogue was frustrating. I was trying to take a message from everything they did, but could find nothing. Perhaps that is the greatest irony of all, that Japanese Consumerism stems from nothing, that people are buying products because they are simply put before them. I respect what Director Toshiki Okada was attempting to do, but did this make for good theatre? For me, no. There was a mixed reaction from the audience, some loved it and others looked as confused as I was.

All in all a disappointing show. Reading the show’s description I was excited to see what Okada had created, but in reality I just didn’t connect with it. Perhaps the humour did not appeal to me as it seemed to do for others. Loss of humour didn’t really matter. It was the lack of message in a show that promised to explore which left me deflated. If you go and see Super Premium Soft Double Vanilla Rich, I hope you get a lot more from it than I did. 2/5