On first walking in, the set of Khandan seemed clean and tidy to an almost clinical level – not the sort of place you would find in a normal family home. However, as the play began, a clutter started to build up and the set burst to life. There was something so believably real about the suburban kitchen I found myself sitting in. It was easy to forget you were watching a play, and not simply the lives of real strangers. The audience were entirely included in the set as photos in frames and wall lamps took up all four walls of the theatre, not just the wall at the back. 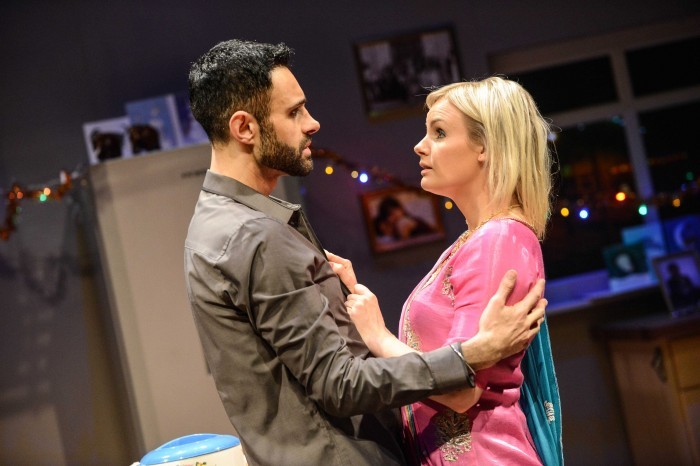 Gurpreet Kaur Bhatti’s Khandan (family) accurately depicts the struggle between an older, more traditionally Indian generation and their westernised children. The contrast in accents between the two generations brilliantly showed this, as did the costumes. Sudha Bhuchar, playing Jeeto, parades a dazzling array of Shalwar Kameez; the colours and patterns of which are distinctly different than the grey and blacks of the suits and jeans worn by her son, Pal (played by Rez Kempton).

What surprised me most about this production was the effort that had been put in to creating such an authentic, genuine performance. The taps at the sink worked, cooking was done live on stage and every detail was thought out, right down to the ingredients used in the ‘cha’. The actors’ performances also had a high level of truth to them. Sudha Bhuchar was sublime, giving a ‘just get on with it’ vibe, and there was a feeling of familiarity across the whole cast that left you watching with a warm feeling that you had known these characters your whole life.

Khandan is gently comedic; the performance glided easily between meaningful moments and times when it was easy to laugh. As their lives unfold over endless cups of ‘cha’, they show there is always comedy to be found, even in the most sombre moments: Jeeto shouting down the phone because “He’s in India, stupid”, a sarcastic comment from Cookie or an awkward silence will always break the tension. This added even more genuine realness to the performance as it created a very natural family setting, where moods change fast and often.

There is some controversy in the performance over Pal’s white wife, Liz. Lauren Crace gives a touching performance which shows her eagerness to be included in the family and the Indian traditions, whilst her husband and sister in law try to move as far away as they can from the values held by their parents.

However, as the set is taken apart, we see that as the realness of the kitchen has disintegrated, so has the truth in the relationships as the family life begins to fall apart. Indeed, the audience is given the impression that perhaps the only thing we are really left with in the end are our memories as the lights fade on the green fields we see from Jeeto’s mind’s eye. 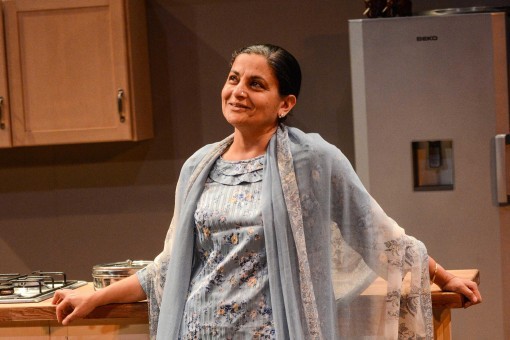 Khandan is on at the Royal Court Theatre until Saturday 28th June. For more information on the production, visit here…