Most novels, movies and plays about crime focus on the criminal; the police that are trying to catch the perpetrator, or even the victim. There is a fourth group however, the innocent bystanders that happen to live in the area. When the Ipswich Serial Murders occurred in 2006, the people of London Road found themselves in surprisingly the most infamous streets in England, through no fault of their own. 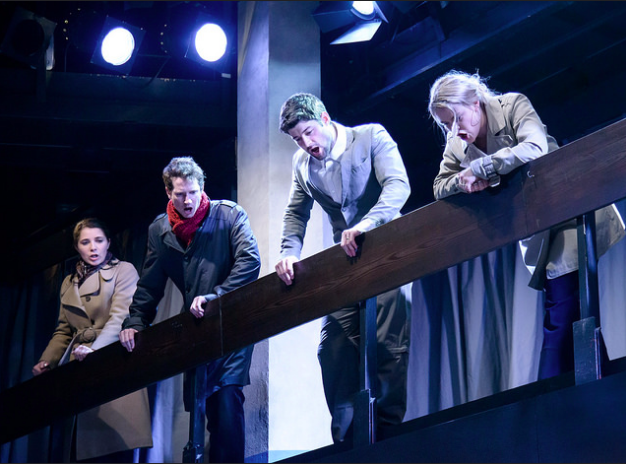 The play is a verbatim musical, with every nugget of dialogue and lyric not just word for word perfect, but tonally and inflexion perfect. Given that at least half the running time is set to music, this makes the shows a technical nightmare for the cast, which they solve admirably. The Old Vic graduate company make it seem effortless as the negotiate scene after scene, song after song.  Part of the shows appeal is in how everyday the characters are.

The company brings the audience into the show using little tricks like putting the raffle tickets on the audience’s chairs. It’s not hard to make the jump that this could have happened just about anywhere. The show is perhaps most distinguished by how banal most of it is. From entire songs about gardening, to a couple of lads chatting in a pub, discussions on how to make the best of a horrible situation. Not one detective appears, the criminal known only by his effect on the people.

By far the most powerful sequence comes when playwright Alecky Blythe focuses his case on the prostitutes, the same ones as could have been the victims. She wisely doesn’t just focus on them, but also the effect their presence was having on the neighbourhood, and how it took five murders for something to be done to help them get of the street. When the working girls themselves take to the stage and try to articulate what happened, it is followed by an excruciating silence, as they stare dead eyes into the audience.

Unfortunately the same banality that proves so strong through much of the play proves its own undoing. One leaves the play somewhat dissatisfied, slightly confused about the plays meaning. This will split audiences. Some are perfectly happy leaving the theatre with a feeling of confusion and something to think about. Others like a plot tied up neatly and a message you can take from it. There isn’t one here, so stop holding your breath for it. Sit back and soak in the everyday, being delivered under exceptional circumstances. 3/5

London Road is currently on at the Bristol Old Vic until Saturday 21st June. For more information on the production, visit here…