Rez Kempton currently stars in Gurpreet Kaur Bhatti's Khandan at The Royal Court Theatre and speaks to Theatrefullstop about the production! 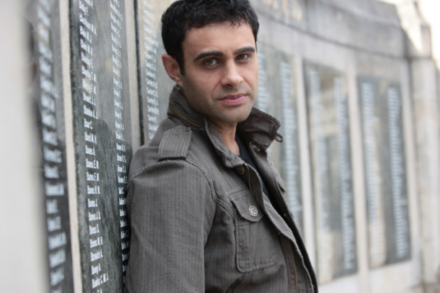 With success at the Birmingham Repertory Theatre, it was only a matter of time before award winning playwright, Gurpreet Kaur Bhatti would see her timely play, Khandan transfer to London’s Royal Court Theatre. A timely piece of theatre looking at family, relationships, generational ideals and cultural clashes, it’s no wonder Khandan has received acclaim both with their audiences and reviewers alike. Khandan plays until Saturday 28th June, and Theatrefullstop was lucky enough to speak to one of it’s stars, Rez Kempton about playing the ambitious Pal!

You’re currently starring in Gurpreet Kaur Bhatti’s Khandan at the Royal court Theatre. Could you describe what the play is about?

It’s a family story and it is a clash of generations. The stories clash between my generation and my mother’s generation. (With) my mother’s generation, she’s a rioter in the 60s from India, (with an) immigrant mentality. Mother’s now passed on, so they had a family run business that the son is now trying to run. He wants to go in a different direction, because he’s British, he’s British born and his ideas are slightly different from the mum’s. The mum is holding on to more traditional values of not only just Indian but also of that community, the immigrants that arrived in this country where they still have strong links back home and the land back home and the whole idea of going back there one day.

You play the role of Pal in the production, could you describe his character?

He’s your typical second generation young man, ambitious, wants to do well, gets caught up with the whole idea of trying to be successful. What does it mean to be successful now? Especially for our younger generation… Is it about money? Is it about family, loyalty and family traditional values? I think Gurpreet, (Kaur Bhatti) who has written the play has measured that so well, it’s so astutely written and so smart, he ends up, through various mistakes, the business, trying to get money from India. We’ve even got the fact that India, being one of the rich countries has got a lot of wealthy rich people who are funding businesses. He’s trying to get money from over there to invest into his business venture here and that goes a bit wrong. He’s very much a young man of our time, trying to find his way, trying to be the dutiful brother, also trying to be head of the family within the Asian context culturally. Even though he’s got an older sister in the play, it’s down to the son, after the father, and on his shoulders that the whole family name and reputation rests and he’s trying to find his way within that.

Khandan made its debut at the Birmingham Repertory Theatre and has now transferred to the Royal Court Theatre. How have you found the process of touring the show?

I wish it was touring, unfortunately it’s only going to be in two places. Everywhere we’ve been, people that have come to the play are saying this play needs to have a longer run! We only had a two and a bit week run at Birmingham and a two and a bit week run at the Royal Court as well and I think this play actually would appeal to a large audience. Maybe a tour would be really useful, not just in London, but further afield like Manchester, Bradford, Leeds, where there’s not just a large Asian community but a diverse community as well. In Birmingham, we had more of a diverse audience and I felt that those people really related to the play very well. What was great for me as an actor was to have people at the theatre that hadn’t ever been there before. I know that because they waited for the play, when it finished, outside to actually speak to the actors and say that this is amazing and why don’t you do more plays like this?

Having received positive feedback from audiences and theatre critics in the response to the production, do you find that this puts pressure on the cast?

Not at all! We do understand that this is Gurpreet’s comeback to Birmingham, although she has written a play, she wrote a piece which was about her own experience as a writer. This is her new piece, which is leaving all of this and all of that behind. I felt that, if I had any pressure, I wanted to do Gurpreet’s work justice. The great thing about the arts and plays and films is it’s about opinions. People have different opinions and different thoughts about things and depending on where you’re coming from, in your own life as well. Yes, its great to get lots of great reviews and people saying it’s amazing, but our job at the end of the day is to be truthful to the play and just tell the story!

For any aspiring actors out there, what advice would you give them?

You’ve got to have belief and don’t lose that passion. It takes a certain brave person to want to do this. I know we live in a culture of quick fame, (where) we’ve got these shows that are on telly that it’s all about trying to get it quickly. Most people that I know that last in the business that work hard didn’t enter the profession for the money, because it’s only the top point 1% that earn the mega bucks! Not everyone can be Tom Cruise, Brad Pitt and Julia Roberts. For most actors, it’s about the job and it’s a calling in life, it’s your passion that you want to do this. If you’ve got that passion,  you want to do this and share stories and ideas, which ever medium, it might be Television, Film or Theatre, then really give yourself that chance. If you’re young, join Youth Groups. Go to your local Theatre, they’ll have groups there, participate, get involved, try it! Even if it’s not onstage, there’s lots of other jobs within theatre and the film industry. We couldn’t do our jobs being onstage without the people backstage doing all the set designing, lighting and sound, everything! We’re so lucky to be surrounded by mega talented people all around us!

Khandan is currently showing at The Royal Court Theatre until Saturday 28th June. For more information on the production, visit here…

For the Theatrefullstop review, visit here…