Michael Essien, I Want To Play As You @ Stratford Circus (LIFT) review

We’ve all grown accustomed to the goal celebrations of footballing legends of both past and present. From buoyant backflips, to jovial choreographed routines, nations rise as team players affirm footballing status. As youngsters, footballing ranks as one of the most aspirational professions to pursue; a chance to showcase to the world how talented you are as a sports personality. Prized and celebrated both nationally and world wide, there’s no disputing the power of football. 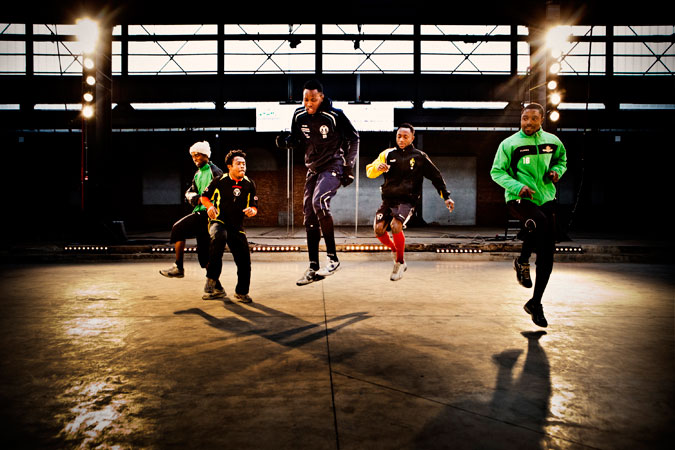 But what happens behind the scenes? We’re conditioned to believe that if you work hard enough, all dreams will be realised… But is that the case? Ahilan Ratnamohan‘s production, Micahel Essien, I Want to Play As You places the struggle of the aspiring footballer to the forefront. The production specifically focuses on the unheard voices of African migrant footballers seeking success within European Football. Four years in the making, the production draws on the experiences of the cast, a group of footballers contributing to the production with their own realities. United by their unjust experiences of exploitation, disregard and their unbreakable spirit, Aloys Kwaakum, Jimmy Nwaoze, Wemimo Osasuyi, Praise Onubiyi, John Obi Agbo and Junior Ndagano Banza spearhead the protest against the not so glamourous world of fraudulent so called scouts and racial discrimination.

To continually work towards an unattainable dream is heartbreaking, and this feeling resonates more so in the first half of the show than the second. The cast’s experiences shock, casting a bright light on such dehumanising experiences as having banana skins thrown at them by their own supporters, being alienated by their own team mates and being left stranded in an unknown, small town location without a contact to speak to or a means to get home.

Choreographed footballing sequences energise the performance, their footwork taking centre stage as they showcase their passion for football. Monologues of their negative experiences connect the play’s structure, however the monologues become repetitive by the conclusion of the piece. As the monologues are static, focusing on the one event, it doesn’t allow for each character to progress, therefore not giving the audience the chance to learn anything more about them.

Ratnamohan directs an authentic and genuine production looking at culture, sport, masculinity and alienation. The production radiates a sense of being down to Earth, much so, that it feels more like the audience are witnessing the ensemble’s football training rather than a performance. Michael Essien, I want to Play As You, named after the Ghanaian midfielder who also plays for A.C. Milan serves as the pin up for the cast, a Ghanaian footballer who has achieved the ultimate dream for playing for one of the most successful teams in the world. A diamond in the rough, this piece of African political theatre most definitely has a future. 3/5

Michael Essien, I Want to Play As You was shown as part of LIFT from Tuesday 23rd-24th June at Stratford Circus. For more information on LIFT productions, visit here…