“It’s the most curious thing I’ve ever seen in my life!” Poppy Burton-Morgan’s production of Alice, adapted from the much beloved book Alice’s Adventures in Wonderland by Lewis Carroll, really was one of the more curious plays I have set out to see, but how can you possibly recreate Carroll’s amazing world without being curious yourself? The pure imagination, creativity and skill that went into piecing together this performance was worthy of Carroll himself, and had the feel as if it had all just slipped off the page and onto the stage. 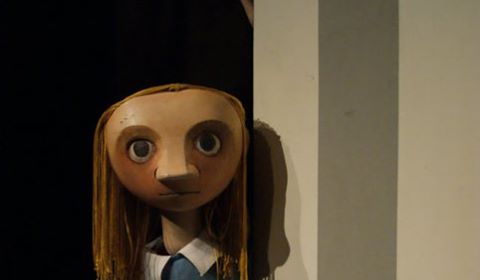 Of course, one of the things that made this particular adaptation work so well, was that it focused on Alice Hargreaves, upon whom the stories were based, and her eldest son Alan Hargreaves, a Captain in WW1. Burton-Morgan says that, “the historical context of this play also allowed me to explore the harsh realities and madness of war…” which she successfully and tastefully achieved, and her parallels are even more poignant as this year we mark the 100th anniversary of the First World War.

The play begins with an air raid siren, which forces Mandy Travis (Alice), to seek shelter in her cellar, where one by one, her dusty old possessions come alive and draw her, as well as the audience, into the mysterious land of underworld, while Jack Parker, who plays her son, Alan, struggles with the insanity of war.

Travis and Parker have beautiful chemistry on stage, really making you believe their mother and son relationship, and in turn, by drawing on those emotions (and the skill of masterful puppetry), they had no trouble making you believe that the inanimate objects which represented the characters of Wonderland, were actually alive – I have never before shed a tear at the sight of a shivering, scared turtle with a helmet for a shell and a gas mask for a face.

We, the hushed audience, sat in amusement and sadness as we watched mother and son, connect with one another, despite the physical contextual distance between them, through their childhood memories of Alice’s Adventures in Wonderland, and clung to the madness of the world they had created in their imaginations, to spare themselves from the madness of the real war happening around them.

For me, it was the use of the typical everyday items (for the time and context) that really brought the whole production together, for as children, didn’t we all pretend our sun hats were spaceships, and our irons were racing cars? As for the puppets themselves, I ask, “have you ever seen a grin without a cat?” The answer will now be yes, and I have also seen a cat created by clipping a mask onto a purse and holding it at the end of a fur collar. I have also seen a stack of books become a caterpillar, a child’s dress and blanket become a white rabbit, a lamp become a red queen and a gun holster with two feathers become a griffin. 5/5

Alice is currently on at The Little Angel Theatre until Saturday 28th June. For more information on the production, visit here…