I didn’t know what to expect from Brasil Brasileiro before I saw it. The posters weren’t exactly informative but promised me that I would ‘want to book a one-way ticket to Rio’ so I was unsure as after to what the two and half hour show would encompass. Fortunately, I was pleasantly surprised. The show had no linear narrative but loosely explored the history of Brazilian dance through musical interludes, vocal performances and dance numbers. 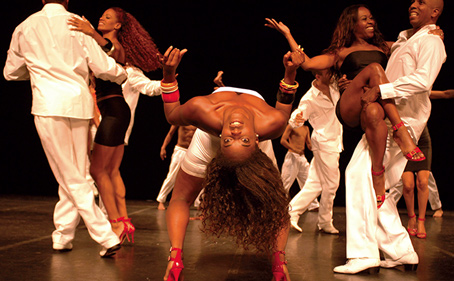 The show was didactic in that it seemed to have thoughtfully chosen numbers to illustrate particularly important periods or influences on the Brazilian culture of dance but the show remained, at all times, engaging and exciting. The dancers had an excellent rapport and there were some beautiful moments between the various couples. So much of the dancing, music and movement was joyous and there were some fantastically sexy and sharp accents too.

One of the most impressive aspects of the show was the feeling of genuine enjoyment and natural spontaneity from the performers: you felt like you were watching a party and there was none of the contrived joy or energy that sometimes can be seen at West End shows.  Partly this was due to the informal choreography but mostly due to the performers looking like they were having a wonderful time. The carnival atmosphere was so believable that it provoked an ordinarily reserved British audience to excitedly clap and stand up and dance unabashed.

The show was sensual and vibrant and quietly thought-provoking about the evolution of dance as an art form. I found Brasil Brasileiro to be a fantastically entertaining show and would be enjoyable for both young and old alike. 4/5

Brasil Brasileiro is currently showing at Sadler’s Wells until Sunday 27th July. For more information on the production, visit here…