It’s turn of the century New York and Esther (Tanya Moodie) is a lonely, naive African American seamstress who sews elaborate lingerie for wealthy white clients. Working out of her lodging house of 18 years, she dreams of saving enough money to open a beauty salon for black women. 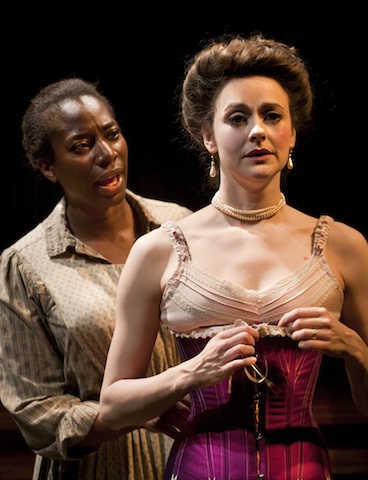 37 years of age and not outwardly pretty, Esther is desperate for love and marriage, but her reticence holds her back. She envies the lives of her patrons and watches as other women marry and live respectable lives. Everything changes when she starts receiving love letters from equally lonely Bajan labourer George (Chu Omambala), who toils on the construction of the Panama Canal. Here is an opportunity for Esther to finally find love and happiness, but there’s a big problem- Esther can neither read nor reply to the letters she receives. She enlists the help of two patrons, unhappily married socialite Mrs Van Buren (Sara Topham) and prostitute Maymie (Rochelle Neil) to help pen her letters.

This multi award winning play by Lynn Nottage, which made its UK debut at Bath’s Ustinov Theatre, follows the compromised dreams and unfavourable circumstances these women exist in. Husbands, wives and fiancées are often mentioned, but never present. Indeed it is the letter writing George, delivering soliloquies with a poet’s voice, smoke billowing around him, who appears part of Esther’s romanticised dream, in contrast to the indifferent George who arrives in NYC, disappointed after marrying his slightly dowdy and sexually reserved wife. In a way all the women have married someone they don’t really know.

Nottage has drawn on her limited knowledge of her great-grandparents through old photographs and scraps to create a history for them, exploring the hidden and forgotten stories of NYC’s 20th century black population. The stage design reflects this history, with bare floorboards, simple, functional props-desks for writing or sewing. A box like backdrop has screened off compartments and vintage style photographs that flash up at crucial moments with text such as ‘ Unidentified Negro seamstress: 1906’ like unearthed historical documents.

The Park Theatre, celebrating its first birthday, is an intimate venue. Every bead of sweat, teardrop and speck of spittle is visible during the many emotive performances. It is George’s conviction that convinces most, his intensity and his interest in Esther’s life savings sewn into her duvet, so much that we can overlook his slightly dodgy Bajan via Bristol accent. Other great performances come from the kindly Jewish haberdasher Mr Marks and his taboo sexual tension with Esther. Dawn Hope is sharp as Esther’s wise landlady Mrs Dickson.

The American dream is ever present throughout Intimate Apparel, the characters dreaming of wealth, love, and in Esther’s case, an escape from her own life. Nottage’s writing is as intricate and detailed as the clothes Esther sews, an unmissable treat. 4/5 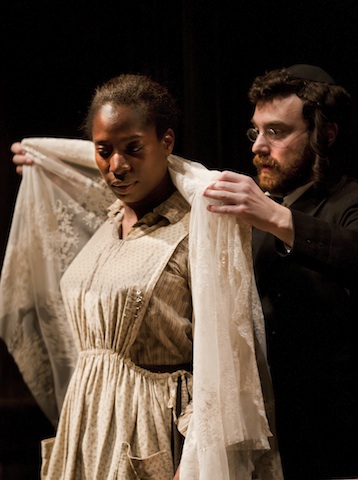 Intimate Apparel is currently showing at Park Theatre until Sunday 27th July. For more information on the production, visit here…