Did you know that whenever you tell a lie, your nose grows longer? Ok, so that may not necessarily be the case but I can guarantee that you went around thinking that after watching Walt Disney’s 1940s version of the much loved Italian classic, Pinocchio. The well known tale of an inventor, Geppetto, creating his greatest invention, a puppet that aspires to become a real boy, is adapted for the Little Angel Theatre Stage. 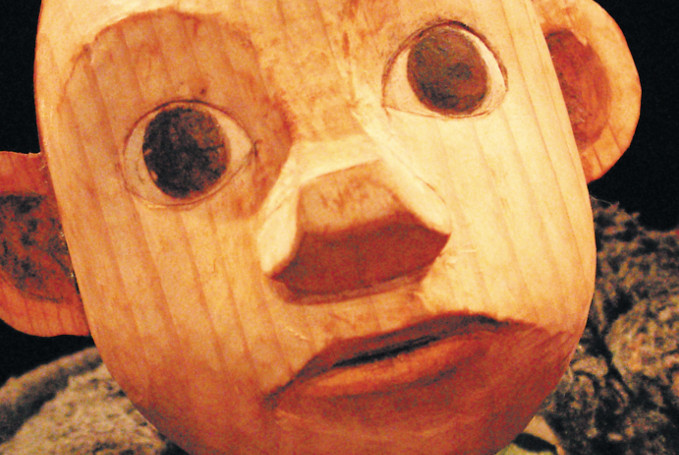 Situated in the heart of Gepetto’s characteristic workshop, Steve Tiplady orchestrates the hour long show as the down to earth, loveable inventor. Incorporating the playful convention of audience participation, which plays throughout the production, this automatically establishes a warm and friendly environment for both children and adults, breaking the fourth wall and encouraging conversation between the performer and the audience. The tone becomes set for the production as Tiplady speaks to the audience, however it takes a while for the piece to well and truly get under way.

Pinocchio magically appears before our very eyes; initially a pile of unassuming furniture pieces, a tree trunk reveals the face of the iconic hero, whilst Gepetto assembles the arms and the legs of the puppet. A highlight of the afternoon, this further showcases the skill and the imagination of both Tiplady and the narrative. Pinocchio and Gepetto’s newly established father/son relationship endears, with Tiplady longing for the advice of the fathers within the audience as to how to get Pinocchio to sleep. A comical duo entertaining the audience with their light hearted exchanges, it’s easy to forget that Pinocchio is in fact an inanimate puppet.

The production primarily focuses on Pinocchio’s interactions with others, as he journey’s alone to discover what the outside world has in store for him. A tale of deception, discovery and reunions, Pinocchio serves as a moral and educative reminder of how important family and friendships really are. A red dustpan and brush morphs into the mischievous and deceitful fox determined to mislead Pinocchio onto the wrong path whilst a green peg serves as the sprightly and energetic Jiminy cricket, who sings a rendition of ‘When You Wish upon a star’, a nod to the 1940s Walt Disney film.

The simplistic, low maintenance, workshop stage design displays its versatility, transforming into a boat on a perilous mission, before sinking into the depths of the stormy sea. Shadow puppetry inventively depicts the boat sinking, whilst displaying the unpredictable nature of the sea, from its animals (sharks, crabs, squids) to the unforgiving current. An example of how puppetry can illuminate a narrative, the production shines brightest when showcasing puppetry skills, however, can become quite slow paced at points. 3.5/5

Pinocchio is currently showing at the Little Angel Theatre until Sunday 20th July. For more information on the production, visit here…

« Previous post
Poet and Playwright Sabrina Mahfouz speaks to Theatrefullstop about her new production, Chef, which will be playing at this year's Edinburgh Festival!
Next post »
Fat Man @ The Oval House Review