Poet and Playwright Sabrina Mahfouz speaks to Theatrefullstop about her new production, Chef, which will be playing at this year's Edinburgh Festival! 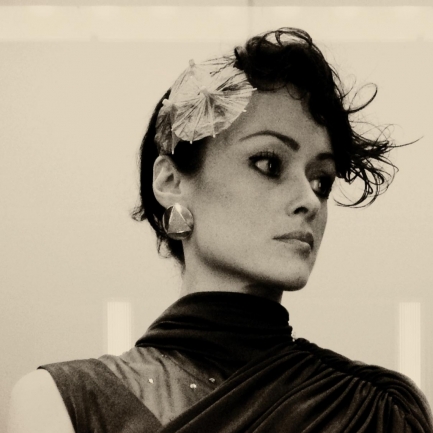 It’s that time of year again, where thousands of fellow performers will embark on the largest arts festival in the world. Winner of the Sky Arts Future Fund, poet and playwright Sabrina Mahfouz is no stranger to the iconic festival, having taken her production of Dry Ice three years beforehand. Sabrina cooks up a storm as she’s set to debut her newest work, Chef, at the Udderbelly Cowgate from 31st July, and speaks to Theatrefullstop ahead of opening night about the rehearsal process, the acts she’s most looking forward to seeing this year and being inspired by chef Ollie Dabbous.

What attracted you to the subject matter of Chef?

Working within restaurants and at the same time working with women who had been through the prison system highlighted so many interesting perspectives and stories – I felt it would be an exciting challenge to combine the two worlds and see who the character would be who could lead us through them both.

How would you describe the rehearsal process and working with director Kirsty Patrick Ward?

Kirsty is the reason that the show got to this point. She contacted me and asked if I was writing anything independently – I sent her a few pages of Chef and she encouraged me and helped develop the character and research the setting. Kirsty and Jade Anouka work very well together so when I come into rehearsals I feel like I get a front seat to a mini show every time.

In what ways did your interviews with chef Ollie Dabbous help with the production?

The interviews were hugely helpful as Ollie is such a charismatic and committed chef, with enlightening perspectives on our relationship to food and how food should be regarded, prepared, presented. Many of Chef‘s foodie moments are inspired by something Ollie said which sparked off my own thoughts on food and how those attitudes can be refracted through a life lived in unordinary circumstances.

How has setting up your own company “POP” through the funding you received from the Sky Academy Arts Scholarship helped you to create the work you want to make?

It has been fantastic as I’ve really been able to explore issues I feel are important and sidelined – such as privatised prisons and women’s position in a gender bias justice system. All the people I’ve worked with over the years have been incredibly supportive of all my excited explorations and collaboration with towering talents in all fields is incomparable for artistic development. There is something special, however, about working to write the style and content in a way that is entirely independent of anyone’s opinion other than your own, the director’s and that of the audience.

How does Chef differ to the last production you took to the Edinburgh?

I haven’t taken a production of my own since my first one in 2011, Dry Ice. The two years following that were plays put on by Made From Scratch with Old Vic New Voices & IdeasTap Edinburgh Award and the Traverse Theatre. It is a completely different level of work to take your own show, being responsible for every little production detail as well as the creative work. It certainly counts amongst one of the most craziest undertakings I’ve ever done! Content wise it differs in that this is a one person play whereas Clean, produced last year at the traverse, was a three-hander and more comic in style and tone. Chef is darker and denser and full of questions.

What other acts and artists are you excited to see at the Edinburgh Fringe?

What advice would you give to aspiring poets, spoken word artists and playwrights out there?

Don’t take anyone’s advice! (unless you really respect them as a person or an artist)

Sabrina Mahfouz’s Chef will be playing at this year’s Edinburgh Festival at the Underbelly Cowgate from Thursday 31st July until Sunday 17th August. For more information on the production, visit here…