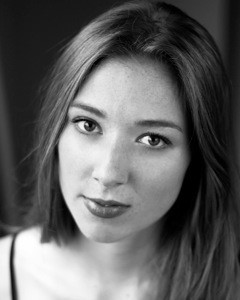 When I say the word ‘news’, what do you think of? Suited and booted news presenters? Received Pronunciation? Complex terminology? Serious Headlines? Pristine news room sets? Politics? If you’ve said yes to two or more of these then prepare for your perception of the news to be changed! Celebrating a glorious 35 years this summer, the sharp and satirical crowd pleaser, NewsRevue returns to this year’s Edinburgh Fringe Festival to offer its alternate look on the ever changing world of Current Affairs. Ahead of this year’s performances, I was able to speak to Musical Theatre performer, Mimi Edwards about her stand out news story of the year, taking part in a Guinness World Record Breaking show and the reason behind NewsRevue’s success.

Mimi, you’ll be starring in this year’s edition of Edinburgh Fringe staple, NewsRevue. How are you feeling ahead of this year’s festival?

I’m so excited. Edinburgh is such a wonderful city – I’ve been a few times but this will be my first time participating in the festival. Everyone I’ve spoken to who has done it before have all said the same thing of the experience – it’s the craziest but most amazing time of your life!

NewsRevue has been previewing at the Canal Café ahead of next month’s festival, how have you found the audiences and the performances?

Our previews seem to be going down really well and we’ve had mixed audiences who have all appreciated different aspects of the show, which is really helpful for us. We’ve changed the show almost every night according to the responses we’ve received, which is, of course, the whole reason for previews. I’m really enjoying the development and feeling everything fall into place.

Could you describe the concept of NewsRevue?

NewsRevue is a satirical sketch show with just over an hour of comedy songs and scenes based on, in the case of the Edinburgh show, the year’s biggest news stories. It’s fast, funny and current.

NewsRevue is renowned for its original and comical take on current affairs, presenting stories through a mixture of sketches and songs. How as performers do you find the process of having to adapt to topical news stories daily?

You find yourself checking BBC news every spare second…! Sometimes breaking news will come in that means changing or often cutting certain pieces completely. You have to know when to be sensitive – no matter which direction you come from, a lot of news is just too tragic to incorporate. I’ve learnt so much about politics, current affairs and Ed Miliband’s speech impediments thanks to NewsRevue.

On the first day of rehearsals, our director brings in all the scenes he considers to be the strongest over the year of NewsRevue at the Canal Café. We read through them all and decide which we like, then get these on their feet. Very often, scripts we’ve read and thought were great don’t work in situ so we found ourselves reverting back to the pile we originally discarded, working them and realising they’re brilliant. It’s really interesting. Once we’ve decided on a preliminary selection of scenes and songs, we start setting and choreographing them. Often right up until the day before we open, things will change according perhaps to breaking news stories or new, preferred scripts which have been sent in.

Are you involved in the script writing and song writing process?

The Edinburgh show is a summary of the year; the best scenes relating to the biggest news stories. For this reason, we start with material used in the last year of shows and these may have been written by a cast member or by someone in the team of writers who send in scripts daily. If they’re not suitable, or no longer relevant, we will often heavily edit or write a new scene altogether. Also, if any of us have an impression or character we are good at, we will often write a relevant scene around these skills.

How as a performer do you find having to play multiple roles?

With a short rehearsal period and such a fast paced show, there is not much time for thinking, you just have to know the material inside out. Little things like props and costume certainly help with switching to a new character often in a matter of seconds. NewsRevue has certainly increased my physical and mental stamina and I have discovered accents and characters I never knew I could do.

As the show involves reporting on topical events, what for you has been the standout story of the year?

Of course, there have been so many massive worldwide news stories this year, but I think the disturbance in Russia and the Ukraine has been hugely significant. That there is still so much corruption in politics is unbelievable and it is the cause of so much news daily. In this country, Operation Yewtree has exposed shocking new information so frequently that I consider this a standout story too.

NewsRevue returns for its 35th year, how does it feel to be a part of a Guinness World Record Breaking show for Longest Running Live Comedy Show?

I was over the moon to be involved in NewsRevue in London, and to be invited to Edinburgh is such a privilege. Comedy has always been a big part of my life and I can’t imagine anything I’d rather be doing this summer. Plus 35 is a great number isn’t it?!

NewsRevue boasts an impressive track record of launching the careers of many successful comedians from Alistair McGowan to Sarah Pascoe, does that put any pressure on the show?

No. There is a reason NewsRevue is so successful and that is due to the team behind it. I have trust in the producers to find the best director and cast to create the best show possible. As long as we are enjoying it, the audience will enjoy it, and I am definitely enjoying it.

What advice would you give to any performers looking to get into comedy?

I trained in Musical Theatre and NewsRevue in London was my first comedy credit. It was exactly what I’d always wanted to do and it increased my confidence in all areas of performance. They change London casts every 6 weeks and I can’t recommend it enough as a great place to start (or do at any stage in your career!). Surround yourself in every kind of comedy- watch the famous, as well as lesser-known sitcoms, mockumentaries and standups. Know what you find funny and be inspired by others. Above all, have no inhibitions.

Mimi will be starring in NewsRevue from Wednesday July 30th until Monday 25th August at this year’s Edinburgh Festival at the Pleasance Courtyard. For more information on the production, visit here…