The ticket to Will Seaward’s latest masterpiece shows the warning “contains ectoplasm”, so straight from the off I knew I was in for some superbly silly fun. Following the success of his 2013 show Socialist Fairy Tales, Will Seaward seems to have earned himself (quite rightly) a large Fringe fanbase: the room was packed on the second performance, a promising sign. 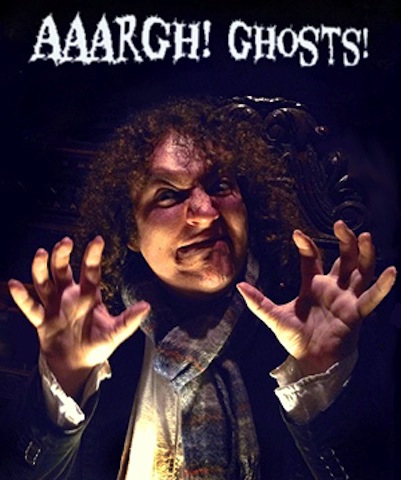 With his large booming voice, wide-eyed stares, and impressive array of fancy jackets, Seaward is a natural born storyteller. After greeting each audience member at the door, he bounded up on stage happily as if he were with a group of friends. His storytelling and writing technique is the perfect mix of fantastical plots, socio-political parody, and downright silliness. That’s not to say it isn’t clever either; despite the many mentions of “poop”, there were several moments of brilliant wordplay which spurred the audience to applause mid-sentence.

I don’t think a minute went by without laughing; it’s a real workout for anyone wanting to exercise their face muscles. I was so enchanted I found myself watching with an open-mouthed grin throughout. Seaward has harnessed the amazing power of owning the stage with minimal props. He did provide plenty of room for audience interaction, offering up activities as segue ways between stories. The audience were invited to tie fishermen’s bends, dig up miniature graves (“With real dirt!” exclaims Seaward excitedly.), and learn about good uses for ghosts. In return, they were on hand to provide sound effects for Seaward. Gasping and cheering along to the tales told, there was an excellent sense of camaraderie the likes of which I’ve never seen in a show like this.

I could not recommend Seaward’s show more. It’s been a day since I saw him and I haven’t stopped raving about it once. If you’re after some silly fun at midnight, this guarantees an hour of laughter, ghosts, and the occasional case of goosebumps. An excellent example of a Fringe show, it is a must see. Buy your tickets now and catch this man before he becomes very famous. 5/5

Will Seaward’s Spooky Midnight Ghost Stories is currently showing at the Gilded Balloon as part of this year’s Edinburgh Fringe Festival. For more information on the production, visit here…