Sometimes puppets say the strangest things. With jaunty little numbers such as ‘Everyone’s a Little Bit Racist’, ‘The Internet is for Porn’  and ‘If You Were Gay, That’d be Okay’, Avenue Q has proven to audiences for years that an adorable, wide-eyed puppet on a hand excuses a show of voicing some of our most uncomfortable, most silenced thoughts. Much as a therapist may encourage their patient to vent emotion through puppetry, so writers Robert Lopez and Jeff Marx have used their fluffy inventions to embolden their audience, whose gasps and shrieks of laughter at The New Wimbledon Theatre last night proved that Avenue Q has lost neither its hilarity nor its shock value since it first opened in 2003. Avenue Q remains, undoubtedly, the most loved, most X-rated puppet show in town. 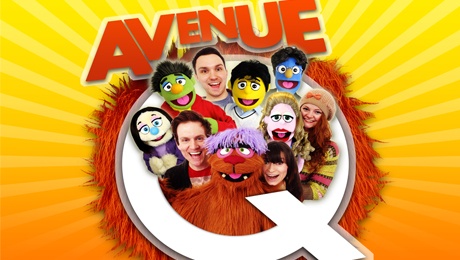 This current tour is produced by Sell a Door Theatre Company, a relatively young (2008) company with a primary focus on a younger target audience: “If we don’t bring the Facebook generation into theatre, we’ll soon be out of a job”. Avenue Q is a show that seems fit for this task – perhaps beaten to the top spot only by The Book of Mormon – because behind the raucous songs and live puppet sex scenes, it is at its heart a bildungsroman, a coming of age story whose characters pine for the mollycoddled safety of childhood and struggle with the pitfalls of independence. Shock-value aside, the real themes of fear of failure, lack of purpose and the struggle to maintain self-belief in the face of rejection are easily relatable to the current situation of today’s young. It is difficult to ignore the pertinence of ostensibly cheerful Preston’s opening number, ‘What Can You do with a BA in English?’ amid soaring University fees and abysmal graduate employment rates. On all accounts, then, Avenue Q is set to strike a chord with its younger target audience.

Sell a Door’s production is an impressively well-choreographed and well-acted adaption of the original, little altered, and with only a few minor sound delays to discredit it. Tom Steedon made for an impressively upbeat Preston and Lucie-Mae Summer did a brilliant job as lead monster Kate, whilst Ellena Vincent’s comic timing as the life-worn Gary Coleman was spot on. The only factor working against the production was the size of the theatre: in a small auditorium such as that of the New Wimbledon, it is more difficult to focus entirely on the puppets, being much more physically close to the black-clad actors twisting around behind them. It is a credit to the actors that focussing on their performance was equally entertaining, but it did feel difficult to suspend all disbelief and become fully immersed in the puppet world.  That said, as with all Off-West End shows it is the size of the theatre that makes it affordable, providing space for a fantastic production without demanding huge ticket prices.

All in all, Sell a Door’s Avenue Q is a highly entertaining night out, showcasing the talents of a theatre company that is focussed on the future of theatre, and on understanding and meeting the needs of younger audiences.  Avenue Q still feels completely topical, illuminating insecurities and attitudes that are felt by everybody. The depressing reality of Avenue Q, a street where everybody’s life sucks, is counteracted by the show’s outrageous humour to provide you with a healthy laugh-through-you-pain type of realism. I guarantee you’ll leave smiling. 4/5

Avenue Q is currently showing at the New Wimbledon Theatre until Saturday 30th August. For more information on the production, visit here…