It’s the discussion about the German AutoBahn motorways that brings up the line “We spend 1/8th of our lives in cars”, a fitting metaphor for travelling too fast or too slow in life. It is on this tumultuous note that sees the audience brought along for a ride across America’s highways. From the confines of a battered BMW’s front seat, several short vignettes explore the darkness of the tenuous relationships and secrets that make up Neil LaBute’s Autobahn. 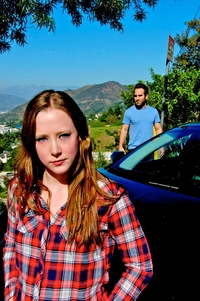 AutoBahn was produced by the cleverly titled Savio(u)r, a UK based American theatre company dedicated to presenting work by new American playwrights. Making its London debut at The King’s Head in Islington, the car prop is the only thing that manages to be more cramped and claustrophobic than the stage. As the stories and characters move from car to car, the long and lonely stretches of road seem to become ever more isolated, and the conversations gradually grow more insidious.

With a cast of four and two characters per scene, the stories focus on two person relationships and their complexities. There’s the hapless and cowardly husband driving his wife home from the airport, who recounts two men breaking into her hotel room and complains of being “sore down there”, with the story continuing down that route. A make out session goes awry when a paranoid bunny boiler obsesses over her past break ups and scares off her date. Or the driving ed teacher takes his young and innocent female student on a “road trip”.

The brilliance of AutoBahn is in the underlying subtext that makes the audience both guess and doubt what is actually happening on stage. Tables are often turned, as characters that appear stronger tend to come out last, as dark secrets are revealed. Each performance seems to outdo the last, but if there is one flaw it’s that after a couple of stories the formula becomes obvious. The stories start with a misdirection followed by a dark secret. The predictability nevertheless fails to lessen the impact and hilarity of each revelation.

Where Autobahn falls short is with the numerous monologues that seem to focus on a character shouting at an inscrutable and non-responsive passenger or driver. While the reconnaissance mission to reclaim a games console from an estranged partner is hilarious, other stories seem to cough, splutter and grind to a halt, much like the rusted car on stage would do if it were real.

LaBute pushes boundaries, touching on and making light of contentious subjects such as rape, paedophilia, infidelity and gangbangs, but the stories can also feel slightly cruel and tragic, even superficial. Thankfully the last story, about a couple forced to drive their foster child back to social services, finally imbues the play with a sense of heart. A heart that stops the play from being a great big pile up. 4/5

A special thanks to Official Theatre for the invitation to the night. AutoBahn is currently showing at The King’s Head Theatre until Saturday 20th September. For more information on the production, visit here…