On first glance, Richmond-On-Thames appears to be an unassuming, picturesque haven with characteristic riverboats gliding down the Thames, to friendly passers by casually strolling along the river bank. However, looks may appear deceiving as one river boat in particular transports its passengers to a completely different world altogether. As the Puppet Theatre Barge embarks on an adventure all of its own, audience members watch on as a 14th Century Arthurian legend plays out before their very eyes. 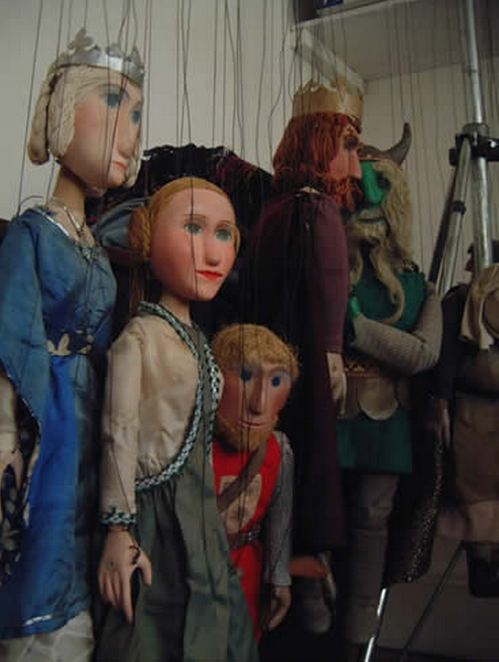 With their autumn season well and truly under way, the Puppet Theatre Barge effortlessly remind their audience as to why the company have been going strong for the past 30 years. Taking on the popular tale of Sir Gawain and the Green Knight, the Puppet Theatre Barge illuminate the narrative with the enchanting art form of marionette puppetry. A production consisting of two Acts, the first Act concerns itself with the Herculean pursuits of Sir Gawain. From the protagonist accepting his challenge from the mysterious and fearsome Green Knight to Sir Gawain battling the likes of bats, giant snakes and a Gruffalo-esque ogre, the inventive and imaginative world in which the puppet operators establish is both visually striking and fun for the audience to watch.

Juliet Rogers‘ script incorporates the lyricism and declarative nature of the original text, however simultaneously allows for the production to become accessible to both adults and children. The second Act places emphasis on the romantic element of the text, with both Sir Gawain and Lady Bertilak taking precedent. The tempo becomes a lot slower, focusing on the human aspect of the legendary knight, however, can appear repetitive after a while. Whilst watching the production, it can become very easy to forget that the characters taking centre stage are indeed puppets, with each character taking on a life of their own. Linnea Haviland, Rosie Leahy, Joshua Middleton, Stanley Middleton and Soledad Zarate collaboratively create a whimsical world of gallant knights, treacherous landscapes and mythical creatures, whilst the late Roger Lloyd Pack domineers as the mysterious and menacing Green Knight and John Quinn as the gallant and noble hero, Sir Gawain. The moderately sized Puppet Theatre Barge takes on Narnia-esque proportions, with the theatrical space unveiling an infinite range of possibilities. 4/5

Sir Gawain and the Green Knight is currently showing at the Puppet Theatre Barge until Saturday 27th September. For more information on the production, visit here…