It is not the first time audiences have seen Long Story Short. After a short run at the Pleasance Theatre in Islington they transfer to Charing Cross Theatre for a whole month. It still feels a considerable short time taking into account that the director Andrew Whyment has brewed this play for three years during which extensive research was made to create this fast-paced thought-provoking angle on today’s media. It tells precisely of a long story that was made short to the public by the journalists and how all stories that we are informed of are told in a shortened and biased way. It goes back to the very start of Rupert Murdoch’s influence in the British press in 1968 in parallel with the process that leads to the resigning of a news editor in 2012. 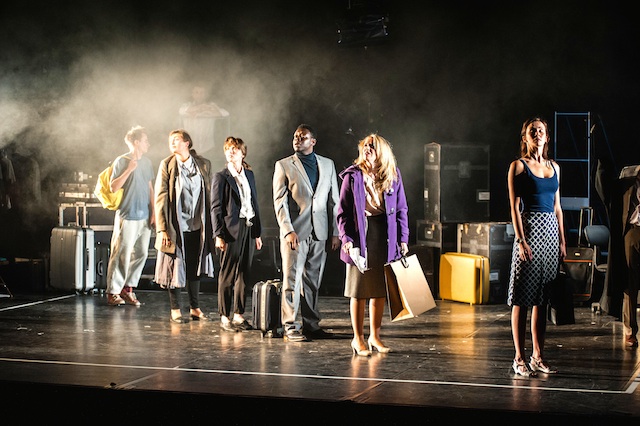 The premise of this story is burning in today’s society and so all of us can easily relate to the world that is portrayed. It follows the journey of a sixteen-year-old boy (Jamie) that is looking for his missing brother, doing whatever it takes to get some information and how he ends up in the public eye. The use of social media, such as Twitter, reminds us once again how viral and out of control things can get when the wrong piece of information is released. The narrative is cleverly plotted although it takes quite a long time to be understandable. However, having read the themes of the play beforehand I created an expectation that was not met. The ‘debate-sparker’ moments were there but I believe they were less about technology and more about how stories can be flipped and transformed by the media and how this pressure for information can make real damages. The fact that the boy was found out by the photo he posted on Twitter seemed just one fact in a much denser plot that involved more serious ethical problems.

In a very ensemble-driven show, the story develops much more sharply as it progresses, with scenes cutting straight to other scenes keeping us on the edge of our seats. Those moments had a very different feel and were much more effective than the often long transitions with unnecessary bits of dance. Even though some of those transitions were beautifully made, others just felt irrelevant and time-consuming.

Cole Edwards captured Jamie’s character in a very convincing way, portraying the different sides to him: the funny and boyish Jamie, the brave, the grieving teenager, and ultimately the grown up Jamie with a tinge of resent and anger in him. Fern McCauley also plays a very strong Amy, the young impulsive journalist, the real guilty one for the chaotic situation created in the newsroom. Sam Jenkins-Shaw had brilliant and witty moments and Eva-Jane Willis captured my attention with her simple yet painful silence and sorrowful expression in the most tense moment of the play.

Mirroring many pertinent issues of our current society, this play still has space to grow and improve as it should continue to do so it can enjoy success for the same amount of time or more than it took to create – I believe the dedicated writers and director deserve it. Let’s make this short story long! 4/5

Long Story Short is currently showing at the Charing Cross Theatre until Saturday 11 October. For more information on the production, visit here…