Teh Internet Is Serious Business @ The Royal Court Theatre Review

“We are Anonymous. We are legion. We do not forgive. We do not forget. Expect us”. What begins as a group of five anonymous online trolls, who view it as their right to stand up for ‘the Hive’ and protect their right to “Lolz”, spend up to twenty hours a day plotting on how to destroy co-operations that attempt to sensor the internet after their favourite video of Tom Cruise is wiped from all websites by the scientologists, soon develops into a life altering web of menacing behaviour and criminal activity as the power and strength of their anonymous personas online begins to drastically outweigh that of them in real life. 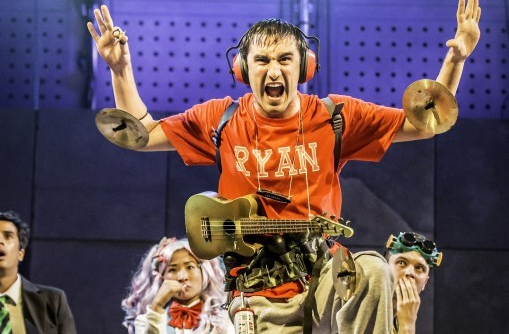 Teh Internet Is Serious Business by Tim Price, is an overwhelming force of colours, codes, vile language and inside jokes that all perfectly portray what the internet is today. With everything from Grumpy Cat, to Condescending Willy Wonka to Rickrolling, the audience was bombarded with the most popular and bizarre memes that are constantly trending across social media sites. To accompany the constant visual and verbal attack of these characters, was loud dance music, rainbow party popper cannons, multicoloured lighting, multiple trap doors and entrances to the stage, a large ball pit, and of course, last but not least – something that nothing is complete without – it’s very own musical number.

The entire production was a complete assault on the senses that left more than one member of the audience lost, confused, offended and laughing, which to me means that Tim Price was extremely successful in his attempt to move the intense universe that is the internet, onto the stage.

Though I genuinely believe Teh Internet Is Serious Business to be one of the most creative, eye opening and unique plays I have seen in a long time, I must agree with one member of the audience who described her experience of the production as “memorable for sure, but definitely an acquired taste.” I don’t believe that anyone who is not a frequent user of social media would understand pretty much anything that was happening in the play, or understand the effect that hacking had on the two lead role’s character archs. For me, without intending to be ageist, this is definitely a production for the more youthful members of the community, who genuinely spend a large proportion of their time engaging in similar jokes and activities online as the five lead ‘Anons’.

Teh Internet is Serious Business is currently showing at the Royal Court Theatre until Saturday 25th October. For more information on the production, visit here…