Walking into the performance space at the Theatre Delicatessen perfectly set the tone for the docu-drama Pedal Pusher. The room which held the audience before the show had been converted into what looked like a hospital ward; complete with beds, a sports message table and x-rays of brutally broken bones. The audience were encouraged to get involved and have a look around, sparking members to try things such as the blood pressure machines and root through the files containing medical history. It was a really refreshing and engaging way to begin the show, and in many ways the space was so impressive that I was hoping it would host the performance whilst we sat around observing from the hospital beds. No such luck – instead the performance took place in a large space filled only with a few chairs and the barriers you find at concerts (and indeed cycling events). 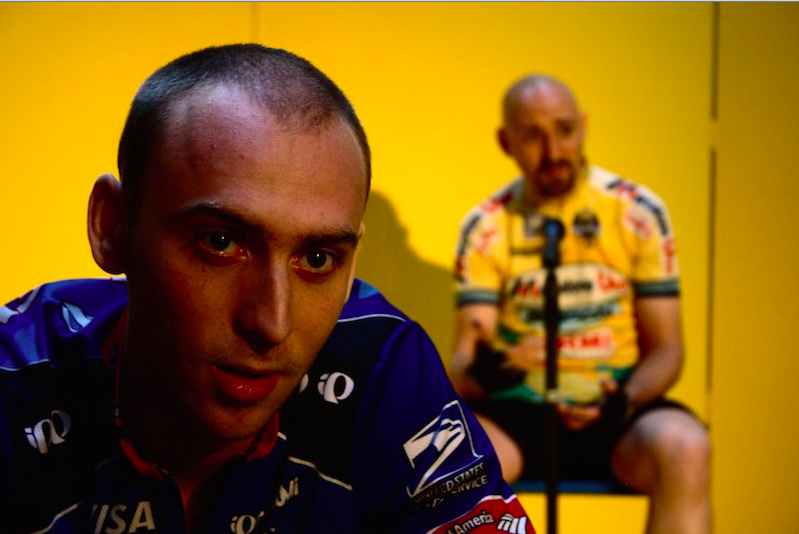 Pedal Pusher faced many problems, the biggest being the chosen subject of the show. Personally I am in no way acquainted with the Tour De France set up, nor could I name any famous cyclists. For me this subject was a totally new experience, so I was hoping for a simple set up which didn’t get too lost in potential pedantic details. Unfortunately, this is the first place Pedal Pusher fell down. The use of verbatim interviews was helpful in getting to grips with the characters and situation, but the rest of the piece was very quickly spoken and often confusing. At times the atmosphere of the piece and empathy for the characters was lost in a barrage of facts and quick retelling of historical events.

The second place Pedal Pusher fell down was the sheer length of the piece. 70 minutes for the first half and 60 for the second, for a devised piece which only had four actors in it and a virtually bare stage. The first half had the audience shuffling uncomfortably, I even heard a few sighs around me. The second half contained the real drama and climax of the piece, but it was all rushed through extremely quickly and was confusing and anti-climatic. The pacing was definitely a bit off and needed to be readjusted. I would have happily gone to see the second half by itself and this way would have left feeling interested and entertained.

Luckily the actors managed to pull along the show and keep it engaging. Gareth Kennerley’s portrayal of Jan Ullrich was very naturalistic, he seemed so comfortable on stage that it really put me at ease. Christopher Tester’s intense speech as Lance Armstrong detailing his gruelling battle with cancer was one of the highlights of the show, and from watching interviews since he managed to capture the vocals of Armstrong impressively. Gergo Danka also has a very nice stage voice, and seemed to do the majority of the date and time listing which was only bearable because of the strength of his delivery. Tom Daplyn played a haunted Pantani and you could see his commitment to the piece throughout. The cast were all really focused and you could see they believed in the show. It was one of the best elements about it. I wouldn’t particularly recommend going to see Pedal Pusher, unless you are a Tour De France fan or have a genuine interest in learning about it. Cut it by an hour and perhaps my opinion would change. 2/5

Pedal Pusher is currently showing at Theatre Delicatessen until 11th October. For more information on the production, visit here…