The premise behind Jump is a basic one: a family who happen to be tremendously-talented acrobatic martial artists. Burglars find out they’ve picked the wrong family to mess with. Hilarity ensues, to a sound between a 90s Nintendo game and an oriental meditation tape. 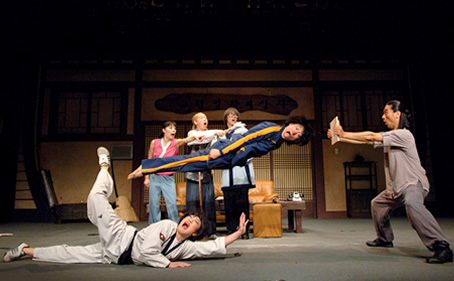 The premise may be simple but it is beautifully executed. The cast is nothing if not professional. Expert timing and movement, consistently in the right place and at exactly the right time. The eye-popping moves of one character take your attention, then minutes later another you could’ve sworn had left the stage, pops up behind the sofa. Seen by over 3.5 million people worldwide, they have had some time to practise and it has certainly paid off.

It is magnetic. The audience were drawn in, clapping unprompted when they were supposed to and joining in with the painful “oohs” of the old man, Sung-Moon Oh, as he limped about, chasing a spotlight. No doubt a joke that will be regurgitated on the playground by the hundreds of laughing children but a sketch rolled out a little too extensively for the rest of us.

Do not go to this expecting any sort of philosophical revelations or cultural observations. The characters, none of whom are named, are uncomplicated to the point of irritation: the grinning drunken uncle, Su-Ho You, and the sexy daughter, Hye-Ran An, (a slightly disconcerting character to be celebrating) flirtatiously batting her eyelids on cue. One touch I did enjoy the transition of her suitor, Yeon-Soo Kim, from ultra nerd to hunky hero at the removal of his ridiculously oversized glasses. Eat your heart out, Clark Kent.

Simply put, Jump is a slapstick-drenched, ninja-infused, crouching tiger hidden panto. Great for the family and, although occasionally trying for those over the age of 15, undeniably amusing. 3/5

Jump is currently showing at the Peacock Theatre (Sadler’s Wells) until Saturday 15th November. For more information on the production, visit here…