You just know a show is going to be good when even the Box Office staff are excited about it, so I expected big things from the Royal Shakespeare Company‘s Henry VI and this much hyped tour does not disappoint! The plot is amazing of course, but it has a fantastic cast, a wonderful set and has been directed very well which really brings this Shakespearean classic to life. 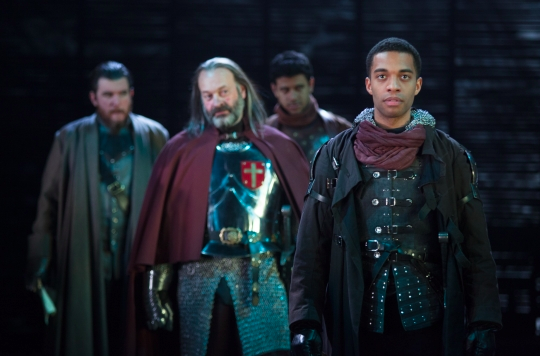 Henry IV Part II follows on from Part I , where King Henry had to defend his crown from war and his son Prince Hal had to make the decision between having illicit fun with his friend Falstaff or starting to take responsibility. At the opening of Part II it is clear that King Henry’s health is faltering fast, but he is unsure as to whether Prince Hal is ready to take the throne. Falstaff on the other hand is sent to gather more troops, but is more interested in making money for himself than anything else! The ending is very heartbreaking with some tough decisions and major changes happening to all characters we encounter.

The opening is modern, with Pistol coming out in a Rolling Stones T-shirt and taking a selfie with the audience (the words #rumour projected behind him) before diving in to the prologue. The rest of the show is done very classically and is performed beautifully. The actors voices are projected well and can be heard right up into the rafters. Their energy and well-suited character choices bring life to the wonderful language of Shakespeare. Anthony Sher is on top form as the conniving yet loveable Falstaff, his commitment to the characters physicality and vocals throughout is spot on. The funny scenes are hilarious, particularly the wild characters that are ‘recruited’ to be the new troops! This combined with very contrasting lighting changes, means that the serious and sombre scenes are even more powerful. The set is very bare and wooden to begin with, although additional scenery is brought on for different parts, and makes you feel like you are actually in an old fashioned Shakespearean theatre! This is an absolute must see for any lover of theatre, especially lovers of Shakespeare. As this is without a doubt how Shakespeare should be done! 5/5

Henry IV Part II is currently on tour, and will be showing at the Marlowe Theatre from 11th-15th November. For more information on the production, visit here…