An Evening with Arnold Schwarzenegger @ The Lancaster Hotel Review

It takes cheek to start a show half an hour late after you ask the audience to arrive at least an hour early to pick up tickets. It takes self-awareness from the host to realise that the best response to Jonathan Ross not arriving on stage after introductions is just getting of it rather then trying to engage a hot, frustrated audience. It takes the former Guvornator of California to have the chaos of the pre-show forgotten within minutes. 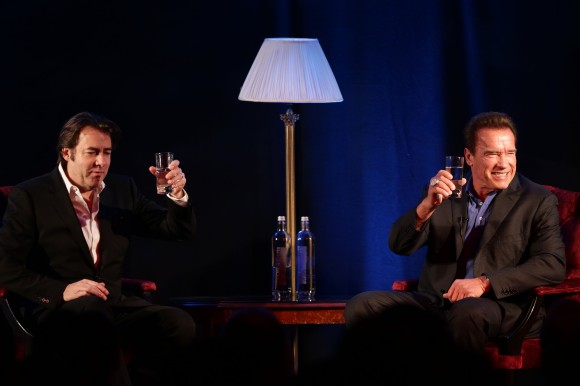 Gathered in the posh Lancaster hotel which was a remarkably unsuitable venue, roughly eleven hundred fans of Arnold got to hear him chat with Jonathan Ross about his career. Even though the cheesy intro video promised a side of him that was unknown, little fell outside the well rehearsed anecdotes about his life. Inspiration against all odds, and tremendous fun.

The reason this evening worked is that the man is so bloody charming. His little stories and inspirational monologues are well rehearsed, to the point of being almost theatrical. He is the American dream, almost to the last comma. I‘m sure the stories have been worked on with the some obsession to detail as defined his bodybuilding career.

It doesn’t hurt that Ross was witty and friendly, clearly in his ‘adoring fan’ mode rather then ‘biting interviewer’ mode. To say he was deferential to Arnold would be to harsh, but when oppurtunities for hard questions rose, he passed them by.

The Q&A however didn‘t work as well. Once again Arnold seemed to jump into something prepared whenever he could. I don‘t blame him, even hardened comedians do the same. It didn‘t help that the question format was straight out of a class room, raise your hand and we‘ll pick you kind of thing. As it drew to a close, Ross was getting visibly frustrated by the questions being asked, a strange sight indeed.

When you do an ‘Evening With’ type of show it’s all about making the audience feel like they met their idols. Arnold is so damn charming (there is a reason he was a movie star and governor) that all he needs to achieve that is a microphone and non hostile audience. Even with a hostile one he‘d do alright I reckon. With a paying audience he was bound to kill.

It could have been longer, it should have been in a better venue and it could have been better curated in terms of the Q & A. Anecdotes could have been fresher and the answers more spontaneous. But the reason he was the biggest movie star in the world for a minute, was that you knew what you would get with him. A damn good time. 3.5/5

An Evening with Arnold Schwarzenegger was on at the Lancaster Hotel on Saturday 15th November. To find out more about Arnold’s future projects, visit here…

« Previous post
We're going on a Bear Hunt @ The Little Angel Theatre Review
Next post »
Puddles the Clown speaks to Theatrefullstop about starring in the international hit show, La Soirée!