This Is Not A Christmas Play is an occasionally hilarious piece of theatre that struggles to be witty and clever while striking gold whenever it goes silly and nuts. It involves two out of work actors, a caricature of a femme fatale and in the middle of it, a desperate guy that thinks that his ex is going to return. 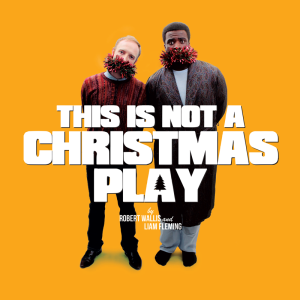 It‘s a play that seems stuck between a farce and being a heartwarming story, with neither story managing to carry it. There is a lovely story of friendship (but a rather lopsided one) hidden in there somewhere, as well as a love/lust/exploration story between the two robbers. Two robbers who have decided to rob a house on Christmas Eve rather than rob an empty one. For some reason, again neither story ever truly takes of. In truth it is a lot of good ideas, some almost briliiant but they drown each other out. None of them however stand strong, except for a great movement/fight scene accombanied by Star Wars music and a potato peeler.

The actors do a solid job with the material. The script is choked full of little witticism that never gets flying, the comedy becoming an underscore to the big laughs. No one stands out but no one lets the cast down, an ensemble performance if nothing else.

It was an average performance of an average play. You won‘t regret seeing it or going to the fabalous venue but don‘t expect a life changing night. Simply a solid farce. 2.5/5

This is Not a Christmas Play is currently showing at the Top Secret Comedy Club until Sunday 4th January. For more information on the production, visit here…

Encompass Productions, This is not a Christmas Play, Top Secret Comedy Club
21st December 2014by Theatrefullstop