Both world famous and putting on plays that receive rave reviews, the West End and Broadway are home to some of the most popular theatres in the entire world. With millions attending productions at each location every year, there’s no doubt that they’re very popular. 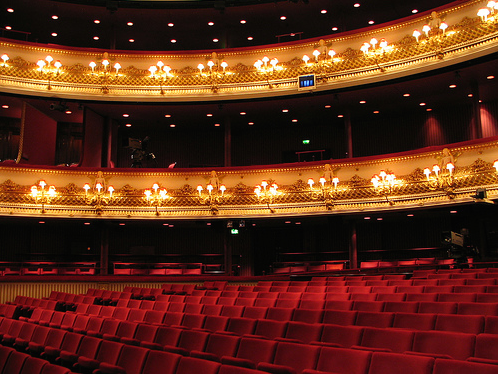 Copyright All rights reserved by globalNix

London’s West End and New York’s Broadway pull in tourists and locals alike, but which one is the best? A bit of healthy competition never hurt anyone, so let’s look at the facts and find out who’s the winner once and for all.

Who’s the biggest of the bunch? Usually the Americans do everything in bigger proportions, but when it comes to the number of theatres Broadway and the West End each have around forty. But what about capacity? 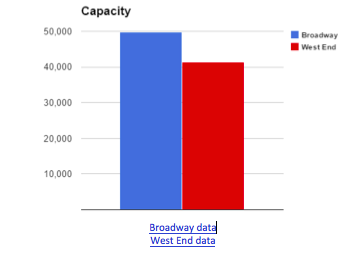 The Americans are ahead when it comes to capacity. On a daily basis the numbers aren’t so different, but over a year Broadway can cater to for an extra three million people.

It’s not a complete loss for the West End though, as it has the bigger theatres. The West End’s biggest five theatres can hold more people than any Broadway theatre.

Overall you’d have to say Broadway wins on size and capacity.

What’s the point in having all those seats if no one’s sitting in them? When it comes to attendance who’s up front? The following graph gives us the answer. 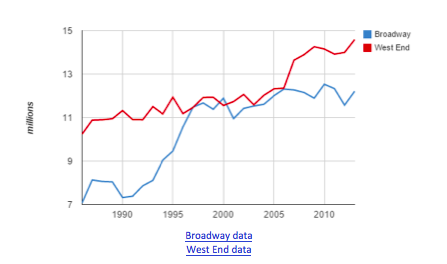 The West End, despite have a lower capacity, has nearly been ahead every year since 1986, with a big upturn recently. Broadway only beat out the West End twice in 1997 and 2000. London started to reestablish its lead in 2006 and Broadway hasn’t come close since.

This is a clear win for the Brits.

Both the West End and Broadway pull in their fair share of big movie and TV stars to act in their plays. But who has the best? The following graph details ten actors – five who’ve played Broadway and five who have played the West End. They’ve all been in recent productions and so, using Metacritic’s career score, we can see who’s been bringing in the best talent. 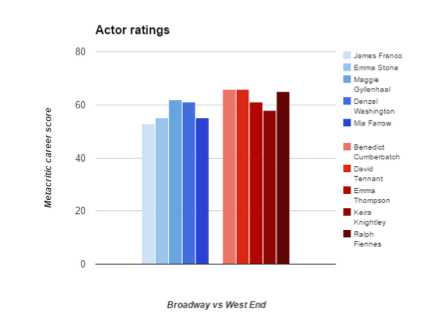 With a 2 -1 win, it seems that London’s West End is the home of theatre. Not only are the actors better, but it pulls in more people for fewer seats. So despite the talk and worry about the health of the West End it seems that everything is fine. If anything it’s Broadway that is a cause for concern.

Information for this article was found on: www.theatrebookings.com.