Roy Williams’ new version of Sophocles’ ancient tale of familial warfare and hubris is brought to Theatre Royal Stratford East after touring the UK at the end of 2014. With this re-telling of Antigone, a story that has been told thousands of times in the last 2,500 years, Roy Williams sheds new light on an old problem. Just how much are we willing to stand up for what we believe in? How far should we go to protect our honour, or that of our family? This is what Williams addresses in a bleak, filthy Thebes where soldiers are “fam” and gangland rivalries are all that matter. 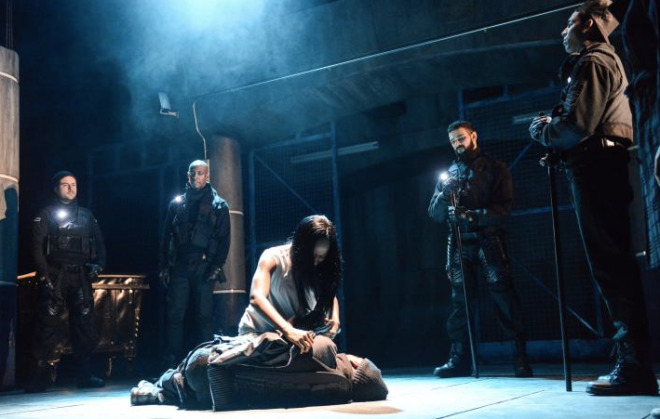 This is Thebes, but not as we know it. Here Antigone is called ‘Tig’ and rightly won’t have it any other way – the ‘Gods’ of the play are watching through security cameras inside and out, a sort of all-powerful ‘big brother’ – always a passive threat. Oliver Wilson as Soldier 1 has a command of the stage that is a credit to him as an actor, but also to the skill of Marcus Romer’s direction, giving Wilson the right amount of aggression, of superiority to be a constant outsider – trying to fit in. There are some strong performances from the younger members of the cast, particularly Savannah Gordon-Liburd and Gamba Cole as Antigone and Aemon, and Williams’ adaptation develops a tryst between them with neat shadows of Romeo and Juliet.

Mark Monero‘s Creo rules from a throne made from a dumpster, in a shiny three-piece suit, and is a fast-talking wisecrack of a general – convinced he must slam his fist down at every turn. Monero pulls this off with terrifying ease, and his performance is certainly one of the strongest, right down to the spittle hitting his detractor’s faces. His club, filled with cheap champagne and dance music is the main setting for the play, and Joanna Scotcher’s industrial, electric design fills the space with a blade-runner aesthetic, only complemented by the impressive projections used throughout.  Late in the piece the stubborn Creo falters, and the switch in his character happens unbelievably quickly, almost not giving the audience time to realise what has happened. This, along with a slightly jarring difficulty with accent from Doreen Blackstock’s Eunice are two small faults it what was otherwise and inventive, classy re-telling of a classic story. This is the theatre that should be being made – telling important, timeless stories in new ways, to appeal to new audiences, but also helping old audiences discover something different in a two thousand year old story, on a Tuesday night in a beautiful theatre in Stratford. 4/5

Antigone is currently showing at the Theatre Royal Stratford East until Saturday 14th March. For more information on the production, visit here…