Creditors, originally by Strindberg, is now rewritten by Neil Smith for a first run at the Brockley Jack Studios. Unfamiliar with Strindberg’s plot in the first place I am uncertain of how much has changed to adapt the modern times, though there are a few obvious references to today’s world. 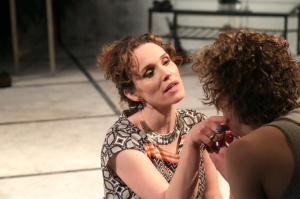 This is an uncomplicated play to stage, with only three characters, bearing many more challenges in terms of character building. It opens with Adolph, an artist, immensely absorbed in creating a sculpture of his wife, as he is being observed by Gustav, his influential new friend. Adolph is instantly perceived as a weak character as he hallucinates and can quickly leap from exaggerated happiness and excitement to an immense anguish and anger. He is unpredictable and that makes this character even more complex and hard to portray. Gustav causes this uneasy sensation of someone who is being untruthful, who is manipulating and he always has an answer ready to build up his case. He slowly questions Adolph about his wife, leading him to feel suspicious and unsteady. His aim is to destroy their relationship but initially I couldn’t be sure of why. It is only when Tekla, Adolph’s wife, enters the scene that we learn Gustav is her former husband.

These characters in this twisted plot are not an easy job for the actors. Tice Oakfield plays Adolph and I feel very uneasy with his performance, though maybe that is the point of it all. It is uncomfortable to watch his mood swings and his moaning voice and ridiculous behaviours make it impossible to connect with the character or empathise. In Gustav, portrayed by Paul Trussell, we never see anything more apart from the manipulative snake; the character is a proper villain in disguise and this makes it quite one-dimensional. His body posture is also bizarre and I can’t feel the chemistry between him and Tekla. Rachel Heaton as Tekla has very interesting moments on stage where she displays a range of believable emotions – although I sincerely cannot understand the character’s choice of husbands.

Overall these characters are unfriendly and bizarre and I feel like I am watching a private family drama or an odd love triangle filled with shouting, manipulation, crying, mental illness, confusion and self-harm. All of this to no particular conclusion – only a tragic ending which doesn’t even make me feel anything in particular. One definitely does not leave the theatre with a warm and fuzzy sensation. The invitation to this window into their private lives is one I wish I hadn’t gotten. 2/5

Creditors is currently showing at the Brockley Jack Theatre until Saturday 11th April. For more information on the production, visit here…