Tumbling After brings together the making and breaking of a relationship in just an hour. A difficult feat, but the devised piece really packs a punch as it explores the twists and turns of what can establish or destroy a physical or emotional connection. 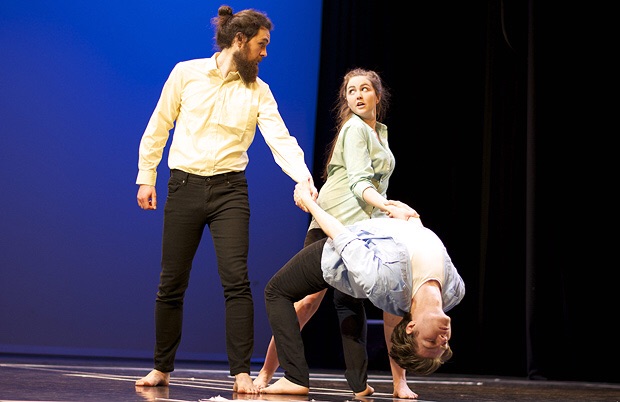 The ensemble cast bound about the stage, and their physical theatre throughout the piece is varied and high-energy to match the turbulent nature of the show. The plot follows two one-night-stands which quickly develop into love, friendship, and more complications than any character expected. The choice of going for a fairytale theme throughout seems like an interesting idea, with Jack and Gill having met Peter and Gretel at the Hill, and in places works well to highlight the naivety of entering into a relationship so quickly and without question. However, as it moves along this conceit doesn’t seem so important and the play could easily stand without so many references to a ‘big bad wolf’.

The show is powerful enough in its plot and character development that it doesn’t need this theme to rely on so heavily, presumably something which could change as the piece is a devised performance. The devised aspect of the piece is clear from how much the show flows into each segment, which works perfectly for outlining a relationship where the stages of commitment can occur at any time.

The cast are brilliant at portraying how couples mould themselves around each other’s lives, with sequences repeated to show a stale relationship taking its toll. Particular mention should go to Kate Goodfellow, whose monologue on those three little words is brilliantly downplayed whilst capturing all of the angst of young love. Some audience members may not be comfortable with the breakdown of the relationships led by Peter (Robert Boulton) and Gretel (Marietta Melrose), which whilst signposted from an early point is still incredibly painful to watch in all the right ways.

The physical theatre here plays a big part in differentiating love from lust, and has the entire audience captivated.
It’s not long before the emotional relationships unravel, and when they do it’s not with a whimper but with a bang. Whilst some of the monologues might run on a little long, the natural dialogue and the powerful choreography (as well as some of the best set design I’ve seen at the Fringe this year) make Tumbling After an excellent introspective on the fragility of relationships. 4/5
Preview written by Louise Jones.

Tumbling After is currently showing at the SpaceTriplex as part of this year’s Edinburgh Fringe Festival until Saturday 29th August. For more information on the production, visit here…