Much Further Out Than You Thought is a powerful one-man play from the MolinoGroup which looks at the devastating effects of PTSD in soldiers. 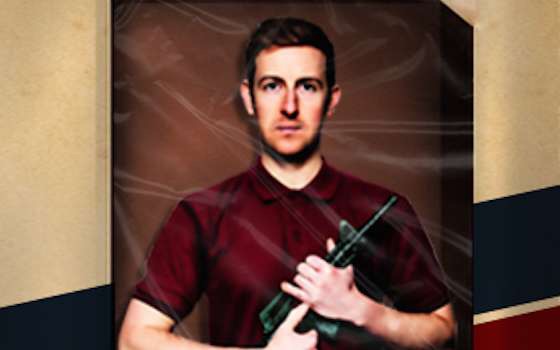 Opening on a grimy, messy living room with action figures and paper airplanes strewn around we meet former Lance Corporal James Randall. He is trying to reconcile his relationship to his son in a special birthday message on Remembrance Sunday. What comes out instead though, are the tragic tales of his time in war, intertwined with equally tragic tales from his life afterwards and the reasons why he joined the army to begin with. Randall is a mere shell of the man he used to be, which is highlighted in many ways. Through looking through his photo album for a glimpse of his former life, his use of child-like humour and toys to try and connect with his son and the regular interruptions to his stories by alarms reminding him to take his medication.

Giles Roberts gives a fantastic performance as the on-edge and restless soldier, and you can feel his desperation to bond with his son. However, his characterisation is almost too good at times. His jerky physicality making some of the more heartfelt stories less engaging to watch. The final stories though are not only heart-breaking, but send chills down your spine.

This play is by no-means an easy watch, it packs an emotional punch into an hour long performance. For that reason alone it is not surprising that it is one of the IdeasTap Underbelly Award winners for this year. Moreover, although not based on a true story, it highlights a very real and important issue today. It shows us what could be the shattering consequences should soldiers not get the help they need soon enough.  4/5

Much Further Out Than You Thought is currently showing at the Underbelly Cowgate as part of this year’s Edinburgh Fringe Festival until Sunday 30th August. For more information on the production, visit here…

Edinburgh Fringe Festival 2015, MolinoGroup, Much Further Out Than You Thought, Underbelly Cowgate
27th August 2015by Theatrefullstop