Dead Dog in a Suitcase @ The Bristol Old Vic Review

This being my first experience of Knee High‘s work, I’m afraid I can’t compare it to their previous critically acclaimed shows. That said, if Dead Dog in a Suitcase (and other Love Songs) is even remotely representational, their reputation as one of Britain’s leading touring companies is spectacularly justified. 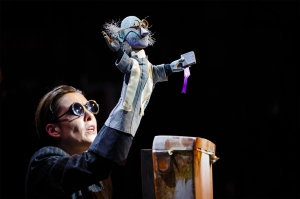 From the second the curtain is raised the audience is completely charmed, then the show picks up speed, dancing through a dazzling medley of physical, musical, and theatrical material with breathtaking skill and stage mastery. The laughs come thick and fast, interspersed by sharp plot twists or fiendishly incisive political observations. The astonishing variety of performance mediums makes this show one of the most comprehensively exceptional pieces of theatre I have seen in some time.

A lot of this is owed to the show’s theatrical influences and heritage; when Mike Shepherd and Carl Grose first started working on the show, it was broadly an attempt to make John Gay’s The Beggar’s Opera accessible and relevant to a modern audience, in much the same way as Brecht’s Threepenny Opera did in his own time. Indeed, the finished product draws extensively on Brechtian techniques of ‘Spass’ (fun): making the audience laugh in order to draw them into considering a political message. These previous formulations of the play impress upon both men the anarchic way in which the innate pageantry and viscerality of everyday life could be used to satirise the political status-quo. Their mission, in their own words, is to employ ‘the mythic underbelly of the NOW’ to answer one simple question – ‘What the hell is the world coming to?’

The result is stupendous. A hilarious, edgy, bohemian romp through the warped facets of modern society, exposing our apathy, our complacency and our untapped political potential by tapping into the liking for gossip and excitement inherent in all of us. The story of the Dead Dog in a Suitcase is an urban myth, but it is this delight in the macabre of the quotidian that is the fundamental leverage catapulting this show into the stories it is telling.  While the general structure of the show might tip its hat to previous works, the aesthetic and form of the show are uniquely Knee High, drawing inspiration from almost every artistic influence imaginable – classical Purcell to modern electro, and turning them into something completely unique. Indeed, it is this fizzing mess of modernity that is what Knee High is exploring. Just as we jump from one aesthetic form to the next, we run the gamut of modern moral quandaries and challenges; the legitimacy of the state, crime and punishment, responsibility and honesty, the twin lures of capitalism and hedonism.

Experiencing Knee High’s new satirical extravaganza is to experience the style of a New Orleons Jazz evening, the adrenaline of a rock concert, the fire of a political rally, and the awful poignancy of… Well, of a dead dog in a suitcase. And all delivered with the charming wit and sizzling repartee that makes this show the crazy, heartfelt, wonderfully irreverent triumph that it is. 5/5 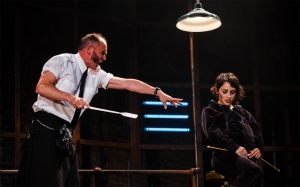 Dead Dog in a Suitcase is currently showing at the Bristol Old Vic until Saturday 21st November. For more information on the production, visit here…