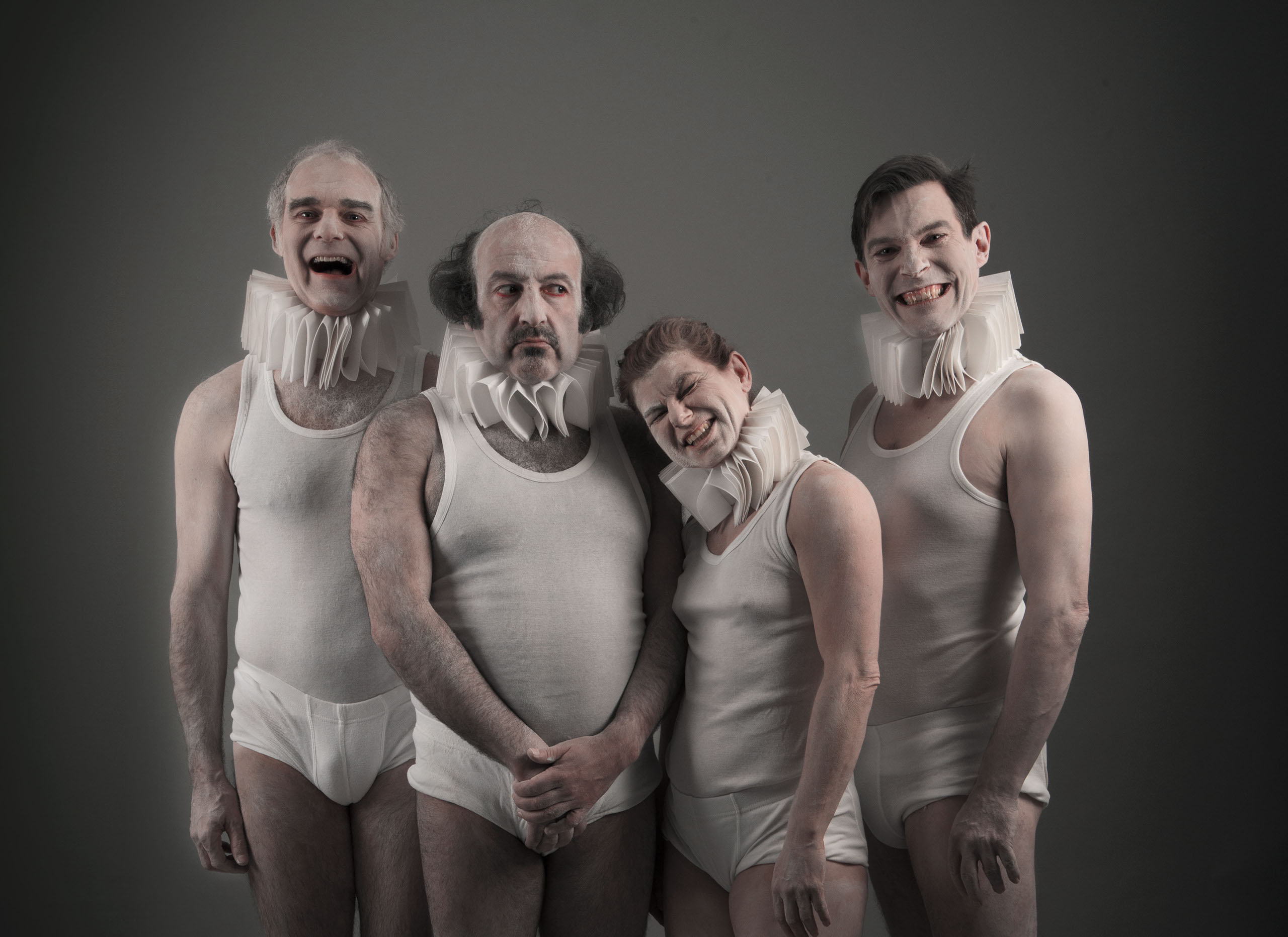 This venture is loosely constructed around the fairly tried and tested conceit of having one character (in this case Toby Park) becoming the Malvolic exponent of ‘serious’ theatre, and deep social interrogation, vs. the rest of the company, who just want to have a good time. There are a number of other sub-plots, such as Aitor’s quixotic quest to become a great Shakespearean actor, Petra’s dogged determination to play Ophelia, despite the fact that she actually dies offstage, and Stephan’s dream to… Actually, God knows what Stephan wants.

Their programme manifesto describes the show as ‘Theatre Jazz’, expressing the hope that there’s not too much ‘rubbish scat’. Unfortunately, it is not certain that this is entirely accomplished. The show seems to be based on some relatively simple fundamental rules; Bodily orifices, fluids, and reproductive organs, are funny. Silly walks, faces, or costumes, are funny. And the more you do something, the funnier it gets. Now, I will admit, these principles are true to an extent, and within a given context, and slapstick is a very subjective beast. However, the show’s appreciation of the importance of both context and the law of diminishing returns seems to be, at best, incidental and, at worst, absent.

Concomitantly, while these tenets are pursued with commendable elan, they often feel like a distraction, rather than any sort of exploration, of the main theme of the piece, and the various plots and sub-plots feel perfunctory and under-developed. It’s a shame, because the central conceit is an interesting idea, and the troupe are clearly an experienced bunch. In this show, however, there is a sense that they let their giant clowny shoes run away from them somewhat, to the detriment of the piece, which misses a lot of opportunities to become something with more depth. Admittedly, this is what they very much set themselves up in opposition to in the outset, but in the final scene, as the show struggles its way to some sort of point, they conclude that both comedy and poignancy are required for a successful show. However pleasingly self-aware though this observation may have been, it doesn’t cast the balance of the previous hour or so in a particularly favourable light.

That said, there is some merit to be found in the production; the costumes and set pieces are imaginative, engaging, and creatively used, such as the meat-grinder of Titus Andronicus, or the impromptu boom-whacker song played upon Aitor. The motif of the handheld camera and Andronican fly, used to create a new micro-stage on stage, is also a recurring gem. The performers are fearless in their physical exploration, committed in their chosen roles, and creative in their experimentation. It is just a shame that any deeper exploration of some very rich subject matter is prevented by the cast’s well-meaning attempts to pull faces, get naked, and insert things in one another. 3/5.

The Complete Deaths was shown on Tuesday 17th and Wednesday 18th May at the Bristol Old Vic as part of Mayest 2016. For more information on Spymonkey, visit here…