Contributing tremendously to the swashbuckling adventure narrative we have all become accustomed to, Robert Louis Stevenson‘s much loved classic, Treasure Island has inspired performers and creatives for over a century in emulating a world as unsteady as the seas the characters see themselves sailing on. 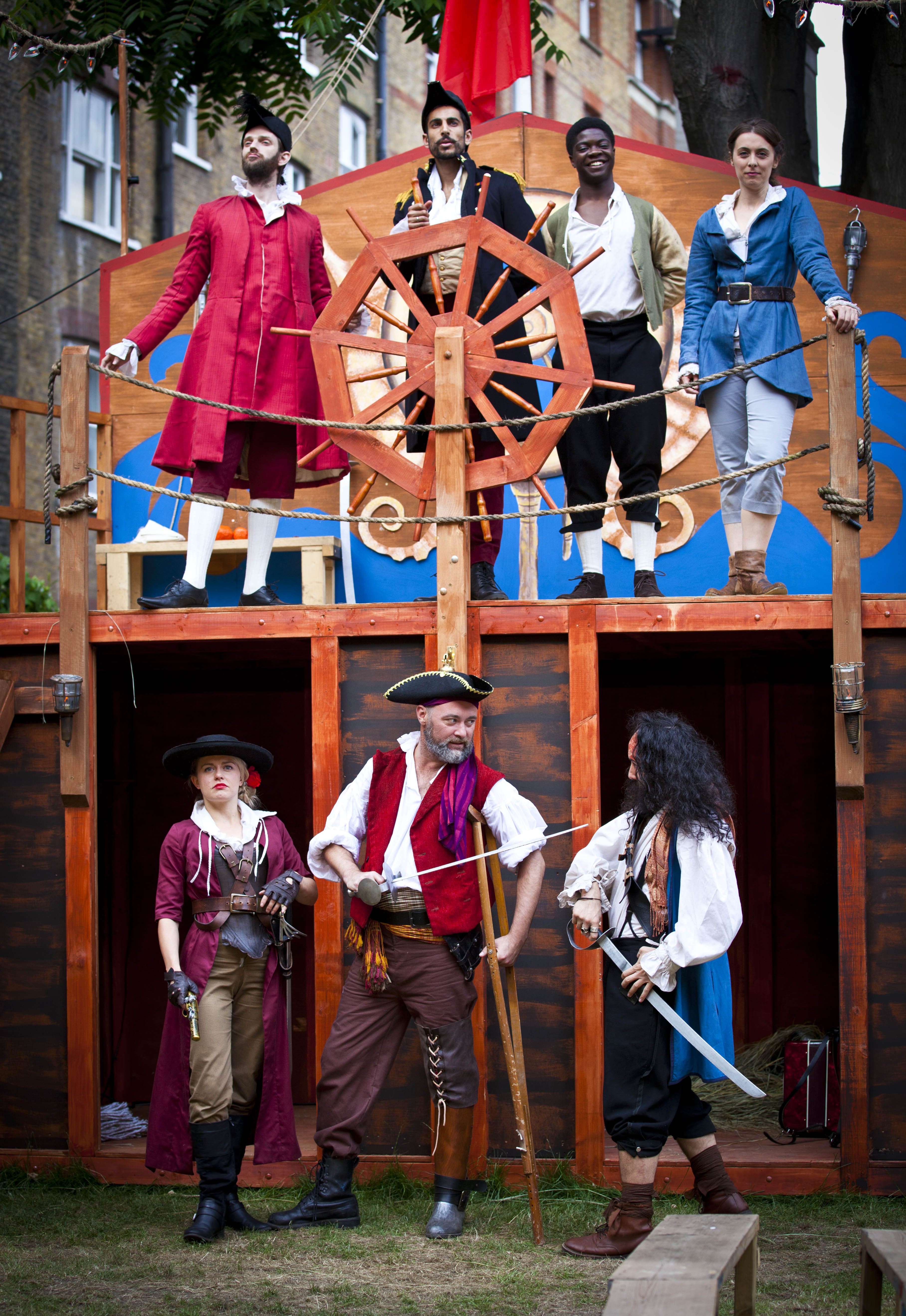 Located in the heart of Covent Garden’s grand yet quaint St Paul’s Church, Iris Theatre navigate the audience and the evening through a perilous landscape of stormy seas and deceptive minds. A story of a young working class boy, transforming into a heroic figure by overcoming unpredictable obstacles automatically has us on side. Harold Addo triumphs as the driven yet down to earth Jim and most certainly holds his own throughout the evening.

What’s smart about the evening is its immersive nature. The seemingly small premises of St Paul’s Church becomes a treasure trove of surprises, mapping out various locations within the 19th century novel. Beginning our adventures at Mrs Hawkins Tavern, we circumnavigate the globe over treacherous seas via Captain Smollet’s brilliantly crafted ship. Wooden benches become our seats whilst impressive wooden panels and worn down sheets tower above us, the masts on this gallant ship. Valentina Turtur leads a very imaginative and creative team which includes Assistant Set Designer Alice Channon and Stage Manager Morrell Rawlins. Iris Theatre are also passionate about providing opportunities for future theatrical talent behind the scenes, and so a special mention must be made to Jane Rankine, Somerville Black, Annick Bosson, Danya Bradley-Barnes and Juliette Minne who all took part in the Set Construction placement, and also to Emily Dyson and Natalia Vieytes who took part in the Scenic Art Placement. The set is one of the star attractions of the evening, and it is all due to the hard work and team work of those behind the scenes. The scenery of the narrative is really brought alive and this is a joy to witness.

The evening’s performances only build on the infrastructures created around them; Anne-Marie Piazza‘s Mrs Hawkins has the audience chuckling from the get go with her nuances, and her turn as the fiery Mexican pirate Isabelle Hands provides the evening’s much needed villainy. Adrian Quinton and Nick Howard-Brown provide considered performances as Squire Trelawney and Captain Smollett, both noble in their intentions to do what’s right. Rebecca Todd‘s Mrs Livesey embodies a gravitas that can’t be taught, she’s a welcomed antithesis to the stereotypical female role with the time period. Dominic Garfield is effortless as the humorously care free pirate Black Dog and Dafydd Gwyn Howells shines as one of the most iconic pirates to have been written about, Long John Silver.

Roger Bartlett‘s fight direction stamps the evening with a sense of fun, sprinkling the evening with a crucial ingredient in making the evening a swashbuckling success. Dr Daniel Winder is mindful to condense this well known narrative into a child friendly performance, this is successful however there are scenes that would benefit from a further edit. The evening is an adventure of two halves, the first filled with surprises that leave the audience wanting to know more and the second more concerned with tying loose ends. The second is a lot wordier and loses that fast paced nature that makes the first successful. Winder directs an inventive and experiential show which makes for a great introduction to a world renowned novel. 4/5