What do the names Trayvon Martin, Rodney King, Eric Garner, Mark Duggan all sadly have in common? They have all been unjustly killed by an institution that is supposedly meant to protect its citizens. Although media emphasis has been persistent in recent years, this is an injustice that has been suffered by many black males in the US, with cases being reported in the UK also for decades now and this is a very worrying reality. 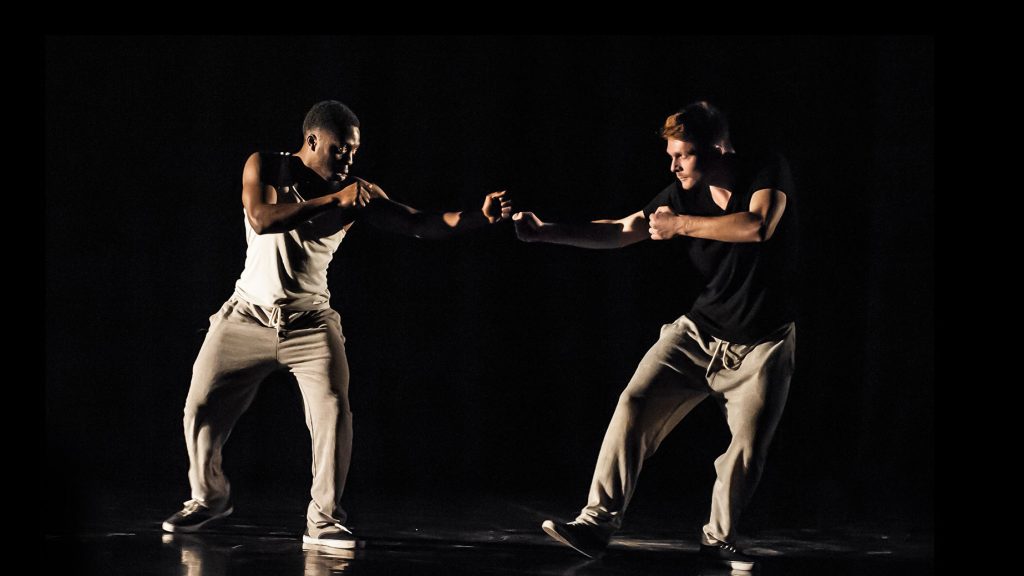 Why in 2016, a supposedly progressive era in the West are there these terrifying cases of innocents losing their lives? Lanre Malaolu and Protocol Dance Company begin to scratch the surface of this question by presenting a dance work in collaboration with Old Vic New Voices. Themes of race, masculinity and otherness dominate the 30 minute piece. Part dance show, part drama, the audience are briefly guided through ignorant throw away comments (it was over 150 years ago, get over it- in regards to the abolition of slavery) and pivotal dance interactions that speak louder than the limited amount of words uttered throughout the show.

The 3 protagonists instantly grab the audience’s attention, each one entering the stage, preparing for the work day ahead. This is a light hearted set up to an otherwise thought provoking piece. The sudden transformation from confident go getters to submissive beings as two white cast members enter the space waving a British flag is heartbreaking. Taking on the characteristics of monkeys, the protagonists hold up a mirror to the abhorrent racist attitudes of those who believed or still believe that becoming a resident of the U.K. constitutes becoming ‘civilised’. Could these types of attitudes be the cause of these unjust killings?

Speaking of their experiences of racism or being ‘the other’, the cast members present a range of cringe worthy scenarios via a cheesy r ‘n’ b boyband set up. This is a fun yet smart convention as this makes a comment on the perception of black performers within the West. It presents the stereotype of being able to dance to a rhythm, and placing whatever these individuals may actually have to say on an intellectual level into the background. Speaking of experiences of being followed by a security guard whilst shopping, or being told they look younger than their age are common place experiences that may appear trivial, however are painful and demeaning.

A stand out sequence of the piece is when one of the protagonists attempt to speak, but can’t. He helplessly flounders around the stage, begging for help from anyone wanting to listen. This sadly powerfully echoes the famous case of Eric Garner in 2014 who’s friend recorded numerous police officers restrain him to the ground and ultimately suffocate him to his death. This is incredibly poignant and goes to show the powerlessness certain citizens are faced with today. This show is a diamond in the rough, it needs work structurally but is a show to watch out for.