Two large circus tents have again been erected in the heart of The Meadows to form The Underbelly‘s Circus Hub and it’s always a hive of colour and activity. Families eating picnics, troupes rehearsing their acrobatic moves on the grass and the sound of rapturous applause coming from inside of the big tops and it sets the mood perfectly as you queue for entry to your show. 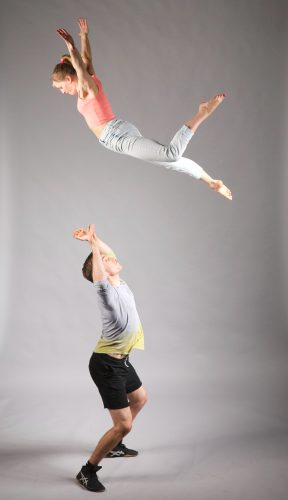 We take our seats in the beautiful and grand space of The Lafayette for the second preview performance of Throwback, a production by young British circus troupe Silver Lining in association with Jacksons Lane. I mention the fact that it is only their second preview as I feel, as with many shows at the Fringe, this piece will only get better with time. On a few occasions, it seems a little under-rehearsed but hopefully the more performances they get under their belt, the more this exciting young ensemble of performers will blossom.

This piece, aptly entitled Throwback has been commissioned as part of Jacksons Lane’s 40th Anniversary celebrations. It’s a kind-of showcase of different circus skills and, at times, feels as if you’re watching a variety show as the performers take it in turn to sing, play instruments, chat to the audience and of course show us their circus talents.

The running theme of the show is memories and the performers each tell us stories from their childhood, sometimes rather poignant and honest, to a backdrop of acrobatics, trapeze, hooping and many more awe-inspiring circus skills.

The beautiful vocals of Tom Ball are a real highlight and the togetherness of the whole group make for an easy watch and a relaxed atmosphere. It is as if we are watching five friends just enjoying themselves and having fun.

You can tell that this piece has been devised by the troupe themselves which is a nice touch and means it is very personalised. However, it does lack some overall direction. There are moments of confusion and slightly too long silences, which tend to break up the rhythm of the piece, nothing that a few more rehearsals could iron out and, as I said earlier, a few more performances will consolidate.

Overall, this is a show worth seeing and a troupe worth keeping your eye on. They’re clearly destined for big things and maybe with a little more direction and rehearsal, we’ll be seeing a lot more of the multi-talented Silver Lining Company 3/5

Throwback is currently showing at Underbelly’s Circus Hub on the Meadows (Venue 360) until Monday 22nd August. For more information on the production, visit here…