The Inevitable Heartbreak of Gavin Plimsole is a contemporary piece of theatre in which the story revolves around a young man who is given a life changing diagnosis, making him contemplate everything and re-evaluate the choices and decisions he has made. 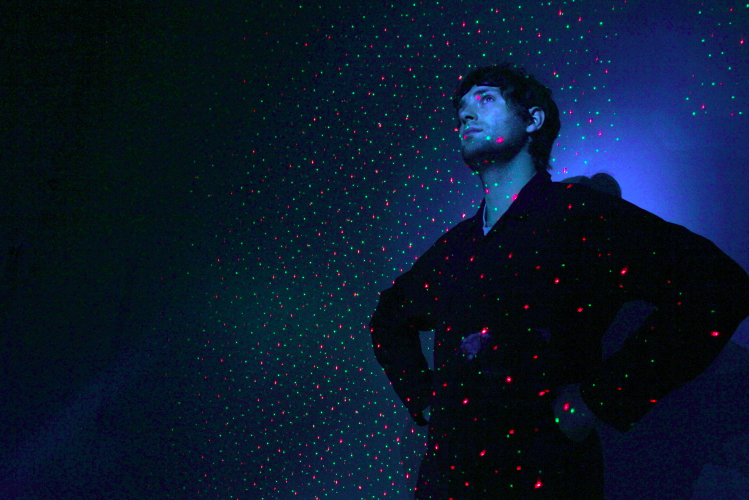 The performance begins outside the venue where we are all given a heart monitor and instructed our heartbeat will be monitored for the entire performance. As somebody who is quite interested in health and fitness, I find this quite a fun concept although the lady behind me is a little less inclined to get involved. However, the actors make it clear it is not a necessity and we happily take our seats.

The show begins with a shed in which we see beady eyes occasionally peeping out at us, until two imp-like characters open up the shed inviting us into the world of ‘Gavin’. This world includes our heart rates projected on the walls and a contraption which sends a marble on a temperamental marble run every 500 of our combined beats. The protagonist opens with a speech about how the world was created – a speech I would say is largely comparable to a speech from Dennis Kelly’s Debris. Perhaps this is where writer Richard Hay found his inspiration?

As the piece unfolds, we are taken on a thought-provoking journey by a rather bumbley and awkward Gavin, played by Rhys Lawton, and a small Greek chorus of two, performed by Sarah Griffin and Richard Hay. The production encompasses so many different forms of theatre and performance styles that it’s hard to know where to start which at times makes the piece feel a little crammed and over-complicated, therefore leaving it slightly clumsy and hard to follow.

However, I commend the company on their bravery and creativity. There are some beautiful and intricate moments and you can really feel the actors ‘playing’. I do feel we, as an audience, could possibly enjoy those moments a little more if the show is simplified slightly, giving us the time to watch, listen and feel.

Overall I think the company, SharkLegs, have created an unusual and imaginative piece of theatre, performed skilfully with some delightful puppets and unique ideas. However, I believe the production would benefit from stripping it back a bit, focusing and refining two or three of the theatre forms and rehearsing them to perfection. 3/5

The Inevitable Heartbreak of Gavin Plimsole is currently showing at The Pleasance Dome (Venue 23) As part of this year’s Edinburgh Festival until Monday 29th August. For more information on the production, visit here…