On a slightly grizzly Saturday afternoon, I venture once more to the Underbelly Circus Hub to see the new and award-winning show Perhaps Hope by company Here and Now. The production focuses on climate change and the problems we face now and in the future with rising water levels and global warming – something the two performers, Rockie Stone (Circa) and Vincent van Berkel (Circus Oz), are clearly passionate about. The pair lift, balance, tumble and manipulate through an hour of fluid and beautiful acrobatics to a soundtrack of eclectic music. 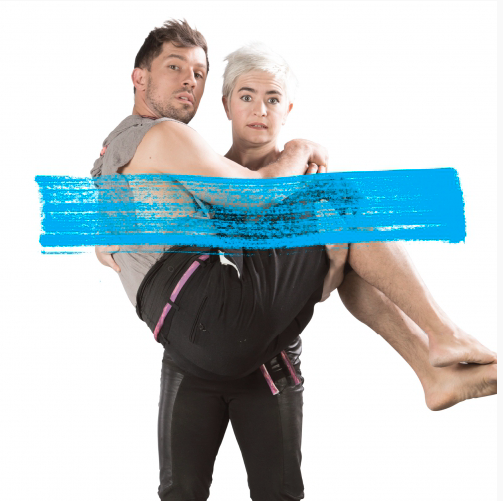 It is clear from start to finish that a lot of hard work and hours of rehearsal have been put into this piece. Occasionally when watching circus (especially a preview show), I find myself half closing one eye, slightly nervous that something may go wrong. However, Stone and van Berkel are so wonderfully in tune with one another that you are never left feeling concerned for their safety or your own. The show uses varied lighting states to give a sense of temperature and some really interesting objects including a metal contraption which, when spun, resembles a type of windmill. There’s also a mass of empty wine bottles, making the opening set of the stage look rather like my sitting room on a Sunday morning.

The performers are hugely talented and their skill is exceptional, however I don’t think I would understand what the piece is about had I not been told. It gives definite feelings of hot and cold & light and dark but even knowing the theme before watching, I’d still struggle to tell you what the story is or how it ends.

To say the production is vague would be slightly harsh. Perhaps it is a choice to leave the story to each audience members own interpretation, however I personally would like a little more clarity, especially due to the importance of the subject matter. Saying that, I cannot fault the performances. The dedication, commitment, strength and physicality is exquisite and I applaud them for wanting to raise awareness for the problems surrounding global warming. A suggestion would be to have a little outside direction, to help connect the dots if you are slightly like me and need a little more explanation. If, on the other hand, you have a wonderful imagination, are a fan of interpretive movement, or if you just really enjoy watching some exceptional acrobatics, this is the show for you. 3/5

Perhaps Hope is currently showing at Underbelly’s Circus Hub on the Meadows (Venue 360) as part of this year’s Edinburgh Fringe Festival until Monday 22nd August. For the review, visit here…