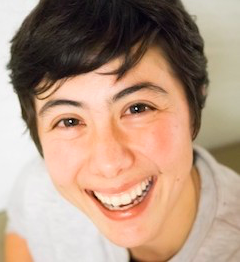 Founded in 2007, Theatre Témoin have created stand out pieces designed to address topics and ideas that may not have much of a spotlight placed on them. Physical Theatre fused with a powerful narrative leaves you with a theatrical experience not to be forgotten. Theatre Temoin’s Artistic Director Ailin Conant is renowned for her social engagement in terms of the projects she works on, working with voices that are often marginalised or forgotten about and it’s clear that this is an element that defines the company’s vision. Ahead of Theatre Témoin’s run at this year’s Edinburgh Fringe Festival of their latest piece The Marked, Ailin spoke to us about the creation of the piece, her inspirations and who she’ll be watching at this year’s festival.Hi Ailin, Theatre Témoin will present their latest piece, The Marked at this year’s Edinburgh Festival. How are you feeling ahead of the festival?

We’ve toured to homeless hostels with the piece in July, so we’re feeling really excited.  We’ve had loads of useful thoughts, advice, and feedback from our hostel audiences with experience of homelessness, and we’re thrilled to be able to bring the piece–infused with their energy–to Edfringe audiences.

The Marked is described as ‘a story about the link between trauma in childhood and homelessness in adulthood’. What drew Theatre Temoin to create a piece looking at these themes?

I wanted to explore was the individual stories of people who happened to be, among many other things, homeless, and crucially what was happening inside of their heads.  And I think if I’m honest I wanted to better understand something I had seen in 2012 in a group of child-combatants-turned-poets who I worked with in Rwanda–the incredible relationship between poetic, creative, mythological thinking and the ability to bounce back from the darkest–for most of us unthinkable–traumas.

From research to the final piece, how long did it take to create The Marked? How as a company do you go about creating the show?

We started 2 years ago with a very extensive process of mask-making workshops with people with experience of homelessness over a year and a half at Cardboard Citizens and St. Mungo’s Broadway, kind of poking at this question of personal mythology and the role it has in processing our past and constructing our future. We had two workshop participants who came onboard as paid collaborators, script writers, and experts-by-experience. One, Sarah MacGuire, is a talented poet and help shaped a great deal of the narrative and language. She also named the show.  Our other collaborator has asked to remain anonymous but he provided inspiration for a lot of the spirit of the show, particularly the character protagonist.  We’ve gone through several stages of development, and the show has had many manifestations, with work in progress showings with our partners at the Everyman Cheltenham, Camden People’s Theatre, St Mungo’s, and Cardboard Citizens.  Today our costume designer saw it and said “It’s brilliant!  I like this 8th version best!”  She was exaggerating, but not by much.

It has also been quoted that “Theatre Témoin feel that it is vital that the most vulnerable in our communities have a voice on stage”, would you say that this is what drives the company to make theatre?

No, I wouldn’t say so in all honesty.  If giving the most vulnerable a voice on stage was our principle aim, we would probably build our company around one cohort long-term, and build our programme around their creative work, like the many amazing companies doing this–Clean Break, Cardboard Citizens, and The Big House, to name a few of our favourites.  We’re more focused on building a broad canon of visually stunning new work with a focus on untold and under-told stories, and we believe that to do that well and in the most excellent and nuanced way possible, it is important that we work collaboratively with communities, and that we approach our stories with humility, and that we engage, and listen.

Theatre Temoin is well known for fusing physical theatre and puppetry to create unique pieces of work. What inspired the fusion of these genres to communicate the company’s ideas?

The core team are all trained in Lecoq pedagogy, and in that tradition we talk a great deal about “masks”, and by mask we can mean a tangible object that is worn but we can also be talking about an abstract mask like a character, a movement dynamic, an object.  So a puppet is a kind of mask, and a specific physicality is another kind of mask.  I guess this is all to say, it doesn’t really feel like a “fusion” to bring mask, physical theatre, and puppetry together.  They all feel like different versions of the same underlying principle.  Masks are built on top of the self, a sort of “other self”, and because so much of our work is about empathy and breaking down notions of self and other, it makes sense that mask-theatre (in a very broad sense of the word) is the style we keep coming back to when making our shows.

As Artistic Director of Theatre Temoin, you help to shape the company’s vision. Who or what inspires you as a creative?

I think my experiences have taught me that the more we can understand and empathise with other people, the gentler and kinder we become.  As a kid I was really attracted to extreme experiences: LSD and war zones and drag racing and the rest of it.  I think I’ve still got a bit of the adrenaline junkie in me but I’ve also had the experience of being bowled over by life, of getting exactly the emotional extremes I was seeking and then some, more than I could handle.  And that’s given me an enormous amount of respect, awe, and compassion for people who have survived extreme experience.  I’m inspired by the enormity of subjective human experience.  I am in awe of it and I want to stage it so we can look at it, together–name it, share it, articulate it.

Will you be watching any acts whilst out at the festival?

I’m so excited The Outbound Project’s The Mission.  The company is made up of a group of phenomenal former students from East 15’s BA Physical Theatre course, I directed their 3rd devised piece a couple years back.  Now they’re all graduated and have won the Les Enfants Terribles Partnership Award, I feel like a proud mum!

What advice would you give to aspiring theatre companies looking to take their work to Edinburgh?

Watch loads of stuff, sign up to be a reviewer or an assessor, learn your taste, make friends with other companies especially those making the kind of work you admire, and make lots and lots and lots of your own work!

The Marked is currently showing at the Pleasance Dome (Venue 23) as part of this year’s Edinburgh Fringe Festival until Sunday 29th August. For more information on the production, visit here…