A night of high energy, excitement and all around extravagance at the newly refurbished York Theatre Royal! Sherlock Holmes: The Hound of the Baskervilles, directed by the well-known Damien Cruden, is a bizarre twist of song, dance and slapstick humour merged with a mysterious and popular drama that many an audience will enjoy. Enter the bold and bright interior of the theatre, with its new contemporary edge and prepare yourself for a mystery that baffles one’s mind and senses from start to finish. 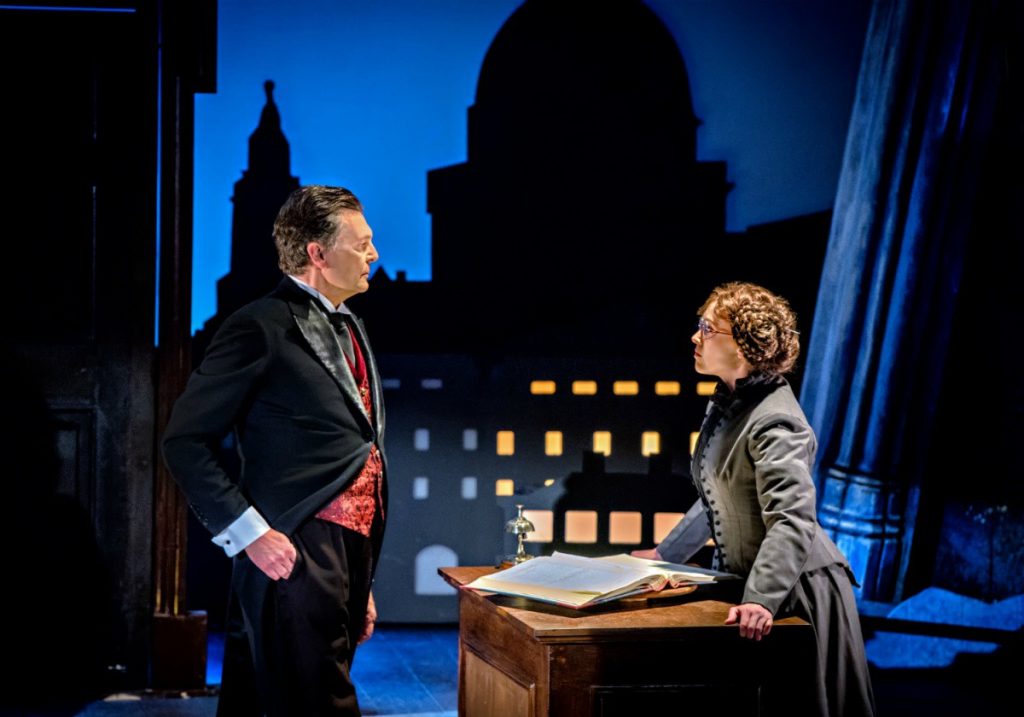 A dark murky backdrop welcomes notorious pantomime villain David Leonard, reformed as sophisticated and all around intellectual Sherlock Holmes. Leonard of course brings his unique wit and skulduggery to proceedings, sending audiences into fits of laughter, uncommon in many other traditional dramas. Although Leonard’s performance is top notch it is apparent that his co-actress, Joanna Holden, who playes Mrs Hudson (plus a variety of other roles) dominates much of the evening’s entertainment. Her comedic timing, amusing aura and bucket load of quick changes are quite absurd; absurd in a somewhat captivating and humorous way. The jittery duo definitely draw the audience in and create the same relaxed atmosphere prominent in many a Christmas panto, as they seemingly glide across the stage quite effortlessly.

Musical accompaniment produces the tension needed to fill the unnerving stage space and requires performers to demonstrate further skill beyond just acting. Balancing the demanding tasks of theatre and song, as well as including elements of dance to add another layer to a rather jam packed production. At some points this gets a little disjointed and along with the constant jokes and wise cracks limits and somewhat erases certain key areas of the Baskerville story. Creating less of a dramatic impact than I guess is expected due to the ‘musical theatre-like’ approach. However, with that in mind it attracts a younger as well as older based audience that perhaps know of the story and want to experience a quirkier adaption. Something the company deliver in abundance.

Overall, York Theatre Royal’s Sherlock Holmes is a refreshing new piece that has you quite literally clasping your magnified glasses tight. Laughs, gags and tomfoolery a plenty as York demonstrates its skill in producing high quality period drama’s for the stage. A light-hearted take on an old classic, Sir Arthur Conan Doyle would be pleased. 3.5/5

Sherlock Holmes: The Hound of the Baskervilles is currently showing at York Theatre Royal until Saturday 27th August. For more information on the production, visit here…